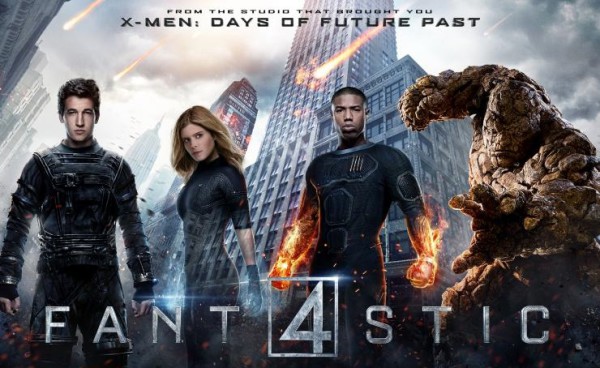 Unlike the characters in the film there was no one to save Fantastic Four from its own doom.

Fantastic Four centres around genius Reed Richards (Miles Teller ) who is awarded a scholarship to the Baxter Foundation to help Dr. Franklin Storm (Reg E. Cathey), and his adopted daughter Sue (Kate Mara), create a teleportation device to send people to another universe. The team acquires help in the form of troubled pupil Victor Von Doom (Toby Kebell) and Johnny Storm (Michael B. Jordan). Richards’s long-time friend Ben Grimm (Jamie Bell) also joins the team, who are genetically altered after an accident. This results in them developing irreversible superpowers. Now it’s up to these newly created heroes to defeat their arch-enemy Doom.

It was clobbering time in the box office for Marvel’s latest reboot of the Fantastic Four, earning a dismal $26.2 million on opening weekend. It’s not hard to see why, recreating of Marvel’s longest running superhero team, has produced a mediocre and bland film.

From the beginning the film exhibits an unimpressive plot that falls short of its previous incarnation, which had a successful initial film plus a sequel, in 2005 and 2007. The dull plot lacks the humour of Guardians of the Galaxy and the action-packed sequences in The Avengers that could have saved it. The narrative lacks a clear direction and lacks a build-up to the final climatic battle, which in itself is a letdown.

Despite an assemblage of Hollywood’s young talent the actors seem apathetic and lack chemistry between the onscreen relationships. This is no surprise with rumours circulating of friction on set between the cast and director Josh Trank. The supposedly lifelong friendship between Reed and Ben is left largely undeveloped in their adult relationship while the total group dynamic, that is evident in the comic books, is ignored with some characters barely having dialogue.

There is also very little interplay and relationship between the four characters as a whole. In some cases the characters have barely any dialogue between them allowing very little time for the audience to get to know them.

The depiction of how the characters got their powers was an innovative and interesting explanation. However the emotional impact of their accident is not fully explored particularly with Ben, who has been transformed into an inhuman stone monster, which we have seen in the previous films.

The graphics are at time underwhelming with much of the film looking like it was shot in a studio.

The boredom sets in within the first few minutes in the film and maintains a low energy and enthusiasm throughout until it finally flat lines with the very short and disappointing final battle.