Q&A with Spiros The Goat

Spiros the Goat has surfaced amid this year’s run-up to the SRC election campaign. He has taken to Twitter to express his views and opinions about the elections as well as Wits University with his catch phrase #ramming. Also known as candidate 47, Spiros has titled himself the “New kid on the Block” with posters and graffiti around campus. Spiros recently made time from his busy schedule to speak to Wits Vuvuzela. 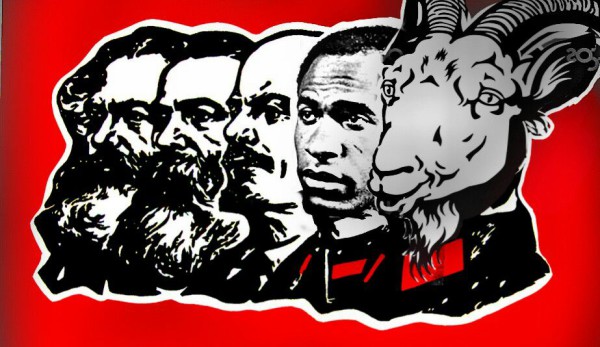 What does Spiros stand for in the elections?
Spiros is a goat that embodies a collective subjectivity grounded in an earnest politics of irony and the absurd. Spiros wishes to bring to bare the ridiculous and depressing nature of representative democracy where political action is reduced to drawing two intersecting lines in the alienated labour power of a fetishized piece of paper (Spiros is aware that the power is in the worker and not in the commodity).

Spiros is an Act, in the Zizekean sense, where political action involves smashing the nascent totalitarian nature of late capitalist
society and rebuilding in on the basis of a ramolutionary subjectivity.

Who do you support in the elections?
Spiros.

Will you be voting in the SRC, if so for who?
Eat the ballot paper.

What’s it like being a goat at Wits?
WITS University is an anti-goat, anti-black, heteronormative, patriarchal, techno-fascist institution. Spiros’ positionality within
WITS is existentially precarious. It’s difficult being a goat when the grass tastes like Capitalist VW excrement. Spiros is currently reading Sartre and Althusser, in tandem (SIGH!).

Where does the name Spiros come from?
Spiros, as a signifier, does not signify Spiros’ essence but merely signifies it for other signifiers (Jacques Lacan).

Are all goats treated equal at Wits?
Spiros believes that Orwell gives a poor critique of leftist-totalitarianism, read “The Joke” by Kundera instead.

What do you thinks about the expulsions of the seven Wits Economic Freedom Fighters (EFF) members?
The expulsion is indicative of the totalitarian nature of the Habib regime and how power relations are skewed against black students and workers on campus. Spiros feels that the exclusion of students signifies a concerted effort to limit the essentially common and public realm of higher learning. Spiros says LIBERATE the common!

However, using Spiros’ Marxist-Leninist-Fanonian-Zhdanovian tools of analysis, Spiros notes that there is a profound contradiction in an organisation that calls itself ‘revolutionary’, seeking recognition from bourgeois institutions. Spiros is disgusted by reformism, and while sympathetic to much of what the EFF stands for, cannot stand as a supporter of closet reformism.

Do you think there is freedom of speech at Wits University?
Spiros deplores this kind of liberal discourse around individual rights. Spiros is not Francois Hollande. It is Spiros’ view that
freedom and the notion of a ‘voice,’ in the political, is only expressed through a ramolutional collectivity. Sorry Daryl Glaser.

Do you consider yourself an artist after you put graffiti on campus?
“Art is going elsewhere, and politics has to catch up.” – Jacques Ranciere

Do you support the graffiti messages?
Support is an arbitrary, bourgeois conviction.  Just like graffiti.

When you’re not running for the SRC what do you do in your spare time?
Spiros is quite the gastronomist – Spiros’ Lonmin CEO soufflé is to die for.