Movie Review: The Man from U.N.C.L.E 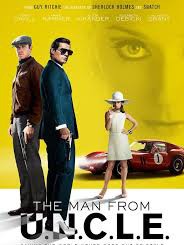 The Man from U.N.C.L.E will take you back to a time when the world was on the brink of war and spies were glamours and slick.

Based on the 1960s television show, the film will transport the audience into the era of the Berlin Wall, the race for nuclear weapons and the height of Italian Vogue.

The film revolves around a  CIA agent, Napoleon Solo (Henry Cavill), and a KGB operative, Illya Kuryakin (Armie Hammer), who are forced to partner up despite their stark differences to stop a dangerous criminal organization from producing nuclear weapons that threaten to destroy the world. Their first mission is to locate a kidnapped scientist with their only lead being the scientists estranged daughter Gaby Teller (Alicia Vikander) who completes their mismatched trio. The unorthodox methods of ladies man, Solo and the conformist and military style of Kuryakin create a comic backdrop to the action scenes that we are familiar with in spy movies.

The film takes a step back in time to the 1960s with authentic fashion, music and spy gadgets. The sound track was also recorded in an authentic sound studio to help transport the audience back in time.

The aesthetics of the film plays an important role with the fashion, from suites to dresses , being particularly highlighted by the efforts of costume designer Joanne Johnston.

But The Man from U.N.C.L.E is not just a fashion show. Fans of Guy Ritchie’s action packed films like Sherlock Holmes and Snatch won’t be disappointed with this film having its fair share of explosions and chase scenes done in an innovative way that still embodies the films of the 1960s.

A pleasant and watchable film with the right balance of humour and action helps to maintain its lightness.

The film has an old-school wit that mimics the 1960s film style with the constant sarcasm and banter between the two leads. Particular attention to the contrast between humour and the serious nature of being an international spy is constantly drawn, which is often created with hilarious action taking place in the background while actors deliver their lines. However the wit at some points is lost partly due to the actor’s flat delivery.

The acting in the film is on the whole, average. Perhaps the film would have been a better success if the two lead actors had swopped characters. Cavill would have suited the role of a consecutive Russian solider much like his all American hero character in Superman. The same could also be said for Hammer’s charismatic personality which would be better suited for the smooth womanizing agent, Solo. The chemistry between the two actors is also lacking after creating an awkward atmosphere. The same however cannot be said for Elizabeth Debicki who makes an excellent villain as the ambitions, intelligent and beautiful, Victoria Vinciguerra.

The Man from U.N.C.L.E is a slick and stylish film that is spotted with laughs,  making it pleasant movie. However the film does lacks the substance that the plot would have required,  to make it an excellent spy movie.

What The Man from U.N.C.L.E  lacks in substance and plot it makes up for in glamour and style and definitely won’t have you calling Uncle halfway through.