With the total money raised for #Access having risen to R3 million, local celebrities are joining the Wits SRC’s campaign to help donate money towards funding for students. 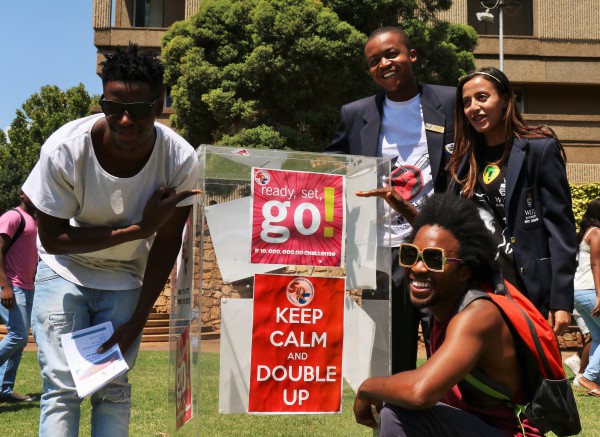 Earlier this week Rappers iFani and and Cassper Nyovest each donated R50 000 toward the campaign which aims to assist students in need. “I decided to get involved because it’s a positive initiative coming from the Wits SRC,” said iFani.

iFani challenged industry professionals to also donate after creating the hashtag #WillYouRespond. Nyovest was the first to take up the challenge and #DoubleUp his donation.

Wits SRC general secretary Fasiha Hassen confirmed that the campaign has raised over R3 million so far but the organisation are hoping to raise much more. “Even if we raise R8 million it’s more than we had yesterday,” said Hassan.

iFani along with Bidvest Wits football players attended the #DoubleUp lunch hour event on campus this week to encourage students and staff to donate.

iFani said he could relate to the financial crisis affecting students across the country as he himself grew up in difficult circumstances. “I grew up kwindlala (in hunger)  … going to school my parents couldn’t afford anything at all, all my funding came from external sources … So I know that struggle, I know wondering where the money is going to come from,” said iFani.

DJ Sbu has also contributed to the #Access campaign by raising R 33 000 for the #SLEF benefit concert on Sunday February 7. The concert features musicians and entertainers including HHP and Emtee.

“Every amount counts and makes a difference … since we came into it at the last minute it’s quite good,” said Hassan.

The Academics Staff Association of Wits University (Asawu) also donated R100 000 from their reserves. This comes after a vote in which a majority of 87% endorsed the donation.

The campaign aims to raise R10 million by the end of the month to donate towards students who do not qualify for the National Student Financial Aid Scheme. These students are referred to as  the “missing middle” – those that are too rich too be poor and too poor to be rich.

The Access campaign was launched at the beginning of the month by the Wits SRC with an initial donation of R2 million from Nedbank.