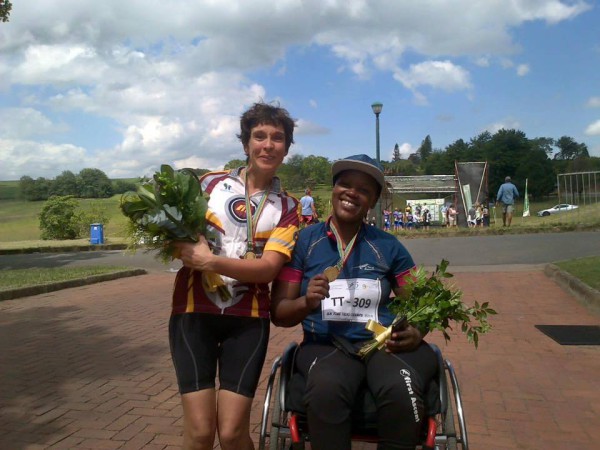 GOING FOR GOLD: Palesa Manaleng and Toni Mould (from left) showing off their medals afetr they excelled at the 2016 South African National Road Para-cycling Championships in KwaZulu-Natal Photo: Provided

Palesa Manaleng, who was paralysed from the waist down in a freak accident last year, won gold at the 2016 South African National Road Para-cycling Championships in KwaZulu-Natal earlier this month..

Hundreds of cyclists took part in the four day championship in Wartburg, KwaZulu-Natal last week including Olympian and multiple world champion Ernst van Dyk and double world champion Justine Asher. “It was a hard race, it was against the best of the best,” said Manaleng.

Despite the warm and humid conditions Manaleng managed to finish the 15km race in a time of 46:54. She admitted the race was hard not just because of the high caliber of competitors but because of a difficult course. “You never know how big a hill is going to be unless you cycle it,” Manaleng said.

Manaleng a former journalist with the Wits Justice Project and ENCA, was paralyzed after a cycling accident close to her home last year. She hopes that para-sports will gain more support from government, spectators and the media. “There are para-athletes who are doing way better than able bodied people,” said Manaleng.

She explained that after the able-bodied awards ceremony, which took place first, most of the spectators had left. “There were people who had broken world records … It’s so sad,” said Manaleng.

“There’s freedom when I am on my hand cycle, no one else matters but the road and myself, I could do it every day if I had the opportunity,” said Manaleng.

“I love to win when my competitors win I want to do better,” said Manaleng.  She strives to one day beat American Alisha Davis. “She is the best so far, I want to beat the world number ones.”

She admits that it will take a lot of work and sacrifice to reach these goals and often doesn’t get to have the social life she used to have. “My friends and I schedule time, it’s like being a CEO of a company,” said Manaleng.

Manaleng’s goal is to compete in the Para-Olympic, the Cape Argus and the female version of the tour de France in the future. But for now her next goal is to take part in the Para-cycling Road World Cup during May in Pietermaritzburg.