After the “Fuck White” protest created a stir on social media a complaint has been laid against Facebook comments made on a picture featured in the Wits Vuvuzela account. 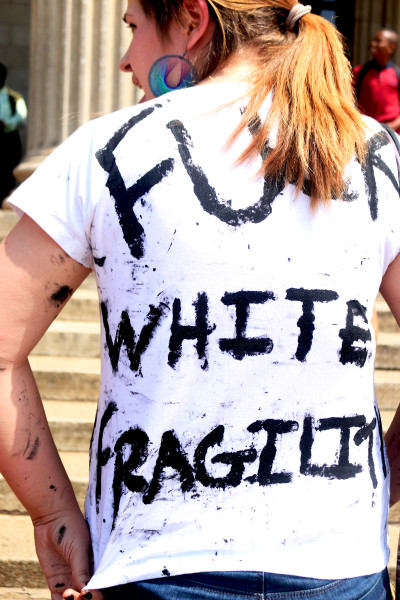 A Wits student wearing a “F*ck White Fragility” T-shirt at the solidarity campaign organised by the movement. Photo: Zimasa Mpemnyama

A complaint has been laid at the Wits Gender Equity Office over Facebook comments that threatened a woman student wearing a wearing a t-shirt reading “Fuck White Fragility”.

The photograph appeared in a gallery of images on the Wits Vuvuzela Facebook account that documented a protest in solidarity with a student who wore a t-shirt with the words “Fuck White People” sprayed on it.

Some of the comments made towards the woman were “More le sy verkrag iewers in n bos…los haar (sic) [Tomorrow she will be lying raped in a bush somewhere … leave her].”

“Give this stupid idiot a bullet. Stupid cow,” read another comment.

“If sexual harassment has taken place then there will be a disciplinary hearing,” said Beukes. However if the comments came from outside of Wits, the Gender Equity Office would no longer have jurisdiction. “We can advise her on her other options,” said Beukes.

Wits Vuvuzela interviewed the student who appears in the photographs. She has requested to remain anonymous due to the nature of the threatening comments.

The student told Wits Vuvuzela that she approached a number of organisations and the Gender Equity Office were among those that were first to respond. She explained she would like to take the issue further but hasn’t yet at this stage.

When asked how she felt requiring the threatening comments she explained there is no way to know whether or not these people would act on the threats however she felt that it is still something to take seriously.

The student said the behaviour is still unacceptable regardless of whether there is intent to do harm or not. “It’s like saying ‘oh sorry it’s just a joke’,” she said.

The Wits student explained why she wore the t-shirt and joined the group of demonstrating students. “Firstly to disrupt whiteness … I was making that political statement and I stand by that statement,” she said.

She believes that the fact that she as a white woman was more “disrupting” to other white people.

“Disruption is a good form of protest … It disrupts even more seeing a white body doing it,” she said.

The protest came after Zama Mthunzi, a Science student painted “Fuck White People” on a t-shirt in an act of protest against financial exclusion and the presence of security on campus, as part of an art activation. A photo of him wearing the t-shirt created a stir on social media and resulted in a complaint against him at the SA Human Rights Commission.