Wits women’s hockey teammates Petro Stoffberg and Zimisele Shange are not only friends but are also excelling in their sport and will be receiving national status.
Tanisha Heiberg 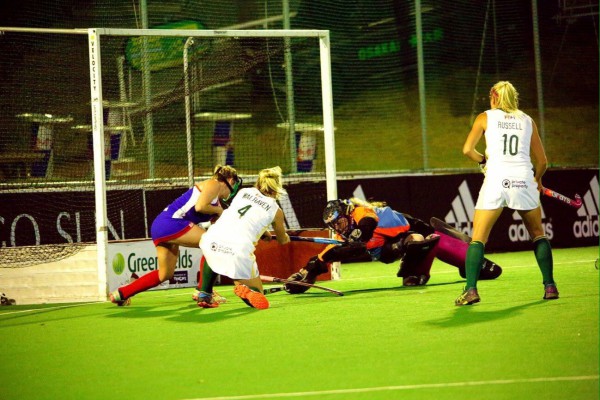 WHAT A SAVE: Goalie Petro Stoffberg saving another goal and helping her team win. Photo: Provided

Wits women’s hockey duo, Petro Stoffberg and Zimisele Shange are not only excelling in their sport but are also friends despite vying for the same position.
The two 1st team goalkeepers have recently each been awarded accolades, with Stoffberg being selected to represent the Namibian under-21 women’s hockey and Shange being selected for the South African A women’s squad along with team mate Luché Klaasen.
Shange explains that she was excited about her selection: “It’s something I have always worked towards,” she said.
Stoffberg explained how she was not only honoured to be selected for her home nation, Namibia’s team, but was also happy for her friend’s South African team selection. “Zimi is one of the beast goalies I’ve ever seen in my life. It’s about time that they saw her potential,” said Stoffberg. Likewise Shange has high praise for her fellow teammate, calling Stoffberg, as an exceptional goal keeper.
Despite Stoffberg being 2nd goalie to Shange they support each other and even train together. “Zimi didn’t see me as under her. She treated me as team mate,” said Stoffberg.
Shange is not only an excellent hockey player but also an avid soccer player who played for the Wits women’s soccer team. “I am definitely going to go watch all their games when they play,” said Shange.
Not only have both girls been playing hockey since they were in grade four but they both hope to excel in future competitions. “My goal is to take the under-21 team to the World Cup in Chile later this year,” said Stoffberg.
Stoffberg, who also won the best goalkeeper of the tournament during the Four Nations series in December, explained how it feels to play hockey. “Sometimes you make a great save and it feels like slow motion,” said Stoffberg.
For Shange her most memorable experience playing hockey was when she travelled to the Youth Olympic games in Singapore as part of the under-17s team in 2010. “Meeting different people, seeing other cultures and going out of the country for the first time was fun,” said Shange.
This powerhouse duo will continue to support each other in Stoffberg’s up and coming Junior World Cup qualifying tournament in Windhoek next month. “We encourage and work together to try keep as many balls as we can out, and if a striker gets a ball through then we do push ups,” said Shange