Wits University demanded an exhibit in solidarity with Palestine, that was meant to continue over the week, be removed today after claiming that it was set up under false pretenses. 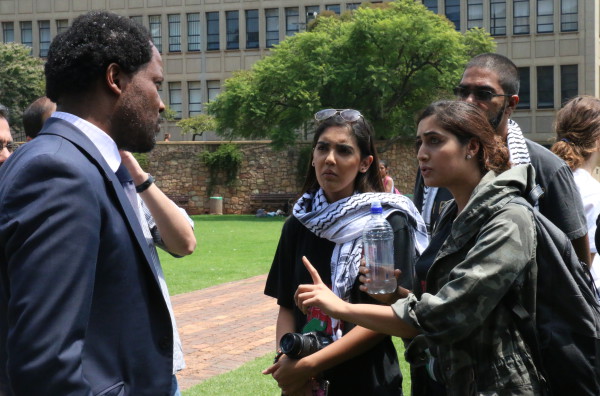 Students at the Palestine solidarity exhibit on campus discussion the removal of the exhibit with Prof Zeblon Zenzele Vilakazi. Photo: Tanisha Heiberg

A Palestine solidarity exhibit was disrupted on the library lawns today when Wits University management demanded the students leave after claiming it was set up under “false pretenses”.

The exhibit included a banner across the library law and included information about the Israel-Palestinian conflict.

The university attempted to shut down the exhibit: “The space was booked for the Orienteering Club under false pretenses. It is now being used to promote #IsraeliApartheidWeek,” the university said in a statement.

But according to the organisers of the event all procedures were properly followed and the event was approved by university management.

“Everything was approved by them and now all of a sudden when they actually realise what it’s about they want us gone,” said Azra Karim a member of the Wits Palestine Solidarity Committee (PSC).

According to Karim acting Dean of Student Affairs Lamese Abrahams told them they need to leave. “We were told we have ten minutes to pack up and leave or will be removed by force.”

The students organising said the exhibition, though themed Israel Apartheid Week, was organised by the Orienteering club and not the Palestine Solidarity Committee. “The PSC didn’t actually book it … The PSC is endorsing the whole week because we have the same stance,” said Karim

Organisers of the event feel that management is treating them differently due to the content of the exhibition. “It makes us question the motives of management and freedom of expression and freedom of speech is being suffocated by students by them,” said Karim.

The university also accused students of being in violation of a court interdict. “The students broke the university’s rules and their behaviour is irresponsible, duplicitous and could put our campus at risk.”

The students were told by Deputy Vice-Chancellor Prof Zeblon Vilakazi that the exhibition will need to be removed by 6pm on Monday and cannot remain for the rest of the week as planned by the organisers.