Will the youth affect local elections?

With registration for the municipal government elections this weekend questions are being raise about how its results could predict the political attitude of the youth. 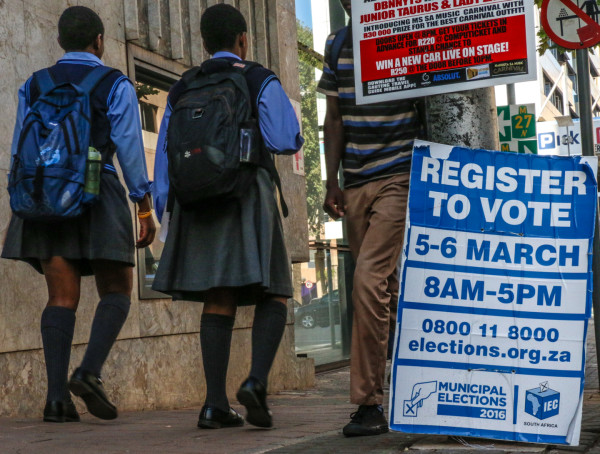 YOUTH REGISTRATION: Campaigns across the country encourgae voters to register for the 2016 municipal government elections this weekend. Photo: Tanisha Heiberg

WITH campaigns encouraging voters to register for the 2016 municipal government elections this weekend, questions remain over how the youth will affect the political landscape.

Youth voter turnout has been low in the past with only 21,7 % of registered voters between the ages of 18-29 according to the IEC statistics on voters registered.

“Youth turnout has been a problem in the past,” said Prof Daryl Glaser the head of department of Political Studies at Wits University.

One of the main contributing factors for the lack of voter participation in the youth is the feeling that their votes won’t make a difference or that the political parties and candidates don’t meet the needs of the youth.

“The reason I don’t think I’m going to vote is because if you go to a shop and you want a chocolate ice cream, and they only have strawberry and vanilla you’re not going to get anything,” said 19-year-old BA student Joshua Labuschagne.

There are students however who are politically active and will be voting in the election. “I do plan on voting … all that I can do is hope that my vote is taken into consideration and I do want change for South Africa,” said 18-year-old BComm Media Studies student Micaila Singh.

With an increase in student activism across the country with movements such as #FeesMustFall and #RhodesMustFall many are speculating how this could affect the country’s politics. “What we have managed to do as students is give us a bigger voice …The country is more willing to listen to what we have to say then they have ever been before,” said Wits SRC general secretary Fasiha Hassan.

“How successfully student activism in particular will translate into national youth voter turnout remains to be seen … Students are not a large proportion of the population, and some radicalised students may boycott elections,” said Glaser.

However these results are not always an indication due to there usually being a lower voter turnout for municipal elections than national elections according to Glaser. The control of key municipalities, including Tshwane, Johannesburg, Nelson Mandela Bay and Cape Town, could be beneficial for parties during the national government elections.

The next registration for voters be held from March 5 to 6 from 8am to 5pm.

The date for the municipal elections has not yet been set down but is expected for the period between the May 18 and August 16 and will officially be announced by the Minister of Cooperative Governance and Traditional Affairs David Van Rooyen.