A team of final year law students from Wits University will travel to Switzerland later this year to represent Africa in the finals of the European Law Students’ Association (ELSA) moot court competition.

Iva Gobac, Kelvin Kajuna, Mxolisi Ngulube and Alexandra Rakitzis together with teams from Rhodes University and the National University of Kenya emerged victorious at the African regional round of the competition held in Grahamstown recently. The three teams will form part of the top 20 universities who will compete against each at the world finals in Geneva in June.

“We are ecstatic about this achievement. This was a team effort and it took months of preparation, hard work and research to get to this point, and it’s always fulfilling to see hard work paying off,” said Ngulube. 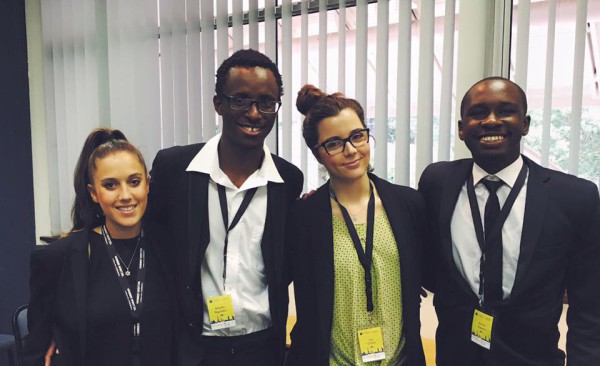 The team finished as runners-up to Rhodes University in the final oral pleadings. Gobac won the best speaker of the semi-finals which comes with a paid internship at the International Centre for Trade and Sustainable Development (ICTSD).

The entire team have been offered the opportunity of an internship at United Nations Conference on Trade and Development (UNCTAD) in Ethiopia.

The ELSA moot competition is a student-run, organised annually by ELSA in cooperation with the World Trade Organisation (WTO).

The aim is to bring together top law students from across the world. The Wits moot court coach, and Law senior lecturer, Dr Franziska Sucker said, “[the competition] is designed to broaden knowledge of international trade law and WTO dispute settlement procedures, with a view to enhancing capacity for meaningful engagement in multilateral trade in the long term.”