The Wits Fees office has remained closed from normal operations following the demonstrations of protest action on 4 April 2016.

Frustrations are high among the office staff who have not been able resume with operations due to the large amount of dust and smoke that lingers in the office. The fumes come as a result of the gases from a fire extinguisher that were sent off in the office during the protests. 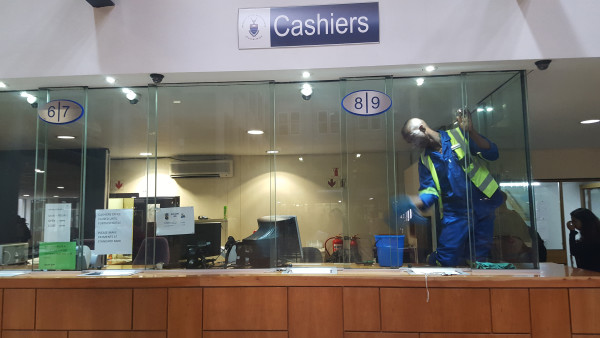 Fees office student administration officer, Denzyl Pillay, has confirmed that operations have been suspended for today, and expects the office to continue as normal tomorrow, Wednesday 6 April. The staff will not be expected to return to work in the office until it has been cleaned thoroughly. The fumes are a “health hazard” as described by manager, Ismail Soobader.

Students who wish to make payments are being directed to the satellite fees office on the education campus and the staff remain committed to serving the students as far as possible. “We treat students with respect, we expect the same from them” said Mr Soobader.

The staff remain shaken by the events that took place in their office and are dissatisfied by the lack of respect shown towards them.

Kim Englelbrecht, a Student fees finance officer, had the task of ensuring the safety of the staff and students. “We are still traumatised” she said in a hoarse voice that had been compromised by the inhalation of fumes. She added that no trauma counselling had been offered to affected staff and many of her colleagues were yet to recover from the fear of intimidation.

The Financial Aid office has continued operations and all staff has been medically attended to. Precious Nkosi works with office admin at the financial office has assured that “Everything is normal.”

Wits Vuvuzela, Students with outstanding fees will not be deregistered, April 8, 2016