The decision to suspend the two men, who are also Campus Control employees, was announced at a general meeting for the union’s Wits branch. Both Cebekhulu and Sadiki have since resigned from Nehawu following their suspension. 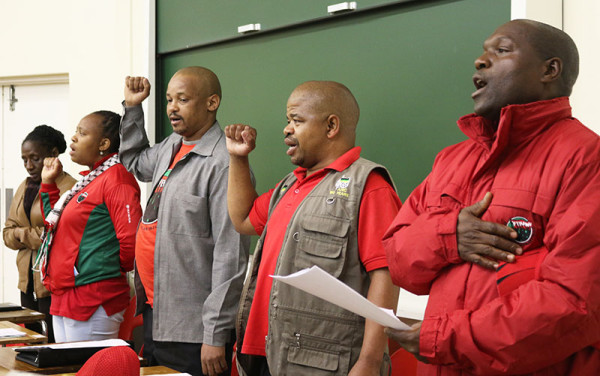 NEHAWU NO MORE: Billy Cebekhulu (second from the right) and Richard Sadiki (far right) were suspended from Nehawu and have since resigned from the union.                Photo: Roxanne Joseph

Cebekhulu and Sadiki are both leaders on the Nehawu Nightshift Task Team, a team put together by the union to resolve disputes between Campus Control employees and Wits management over nightshift allowances. Wits Vuvuzela reported in 2013, Campus Control workers allege that Wits management owes them money for their nightshift allowance which was not paid to them between 2001 and 2009.

According to Cebekhulu, while trying to resolve the matter, he emailed Wits Deputy Vice-Chancellor of advancement, human resources and transformation, Prof Tawana Kupe.

During the union’s general meeting, Nehawu’s Vuyani Mabaxa regional office bearers issued two separate reasons for the suspension of the leaders, said Cebekhulu. Sadiki was suspended because he signed a petition that belonged to the Wits Insourcing Task Team (ITT), an action which is an alleged violation of the union’s constitution. Cebekhulu’s suspension was as a result of the email he wrote to Kupe, a task that belongs to the Nehawu regional branch secretary.

However, both Cebekhulu and Sadiki are not convinced about the reasons issued to them. “We believe we were suspended because there is a corrupt relationship between the upper structures of the union and Wits management,” said Cebekhulu.

Kupe denies that the university is involved in internal Nehawu matters.

“Wits management has never and does not involve itself in the internal affairs of staff associations, unions or representative bodies. We want credible representative leadership democratically elected by their own constituencies with whom we can negotiate lasting solutions or agreements,” Kupe told Wits Vuvuzela.

Nehawu was not available for comment at the time of publication.