Midfielder for the Wits Football Club (WitsFC), Mahle Mtabane, 3rd year BA, is determined than ever to finish his studies and rejoin Kaizer Chiefs. 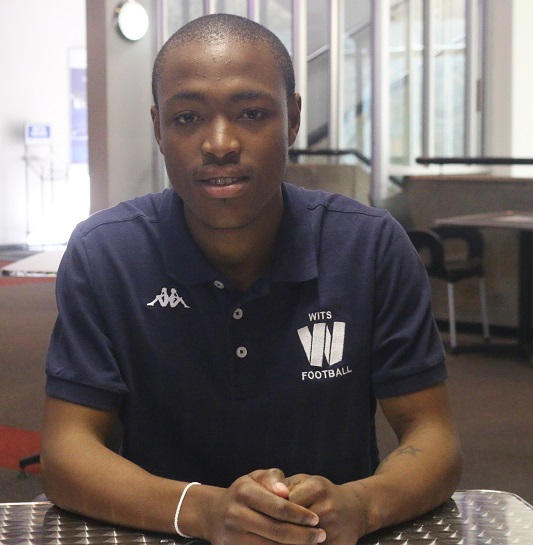 WITS FOR NOW: Hlehle can’t join Chiefs yet, but its the prize hes set his eyes on.
Photo: Wendy Mothata

Mtabane, affectionately known as ‘Hlehle’ started playing soccer at an early age, in the streets of Johannesburg at Naturena. When he was 8 years old his parents saw the talent in him and took him to the Wits Juniors team, a path that would ultimately to a stint playing for the Chiefs.

Hlehle met up with Wits Vuvuzela this week. He walked into the popular Wits Theatre with a big smile, wearing his sports clothes. He pulled up a chair for a quick chat.

At the age of 14 he joined the Bidvest Wits club for two years. Little did he know that this would pave a way for him to play for Kaizer Chiefs for two months. This challenge came in last year when Kaizer Chiefs wanted to sign him for South African Brewery League and Multichoice Diski Challenge.

“I’m looking to go pro in football, my first step would try to make it into Premier Soccer League.”

“I couldn’t sign because I wouldn’t be able to meet my bursary requirements stipulated by Wits sports,” he said.

“I want to finish my studies first and then maybe at the end of this year I could pursue my career at Chiefs since it’s my last year, he says while he swirls around in his chair. “I’m looking to go pro in football, my first step would try to make it into Premier Soccer League.”

Not only does Hlehle have big dreams, but he is also not intimidated by playing with older guys. “Football isn’t really about age and physique, it’s mostly about mentality. The ability to think ahead puts you on the same level as someone older than you,” he said with a grin.

“His performance so far have been good as he delivered the cross for our first goal of the Varsity Football Tournament.”

One of his favourite moments in his soccer life includes representing South Africa in Namibia for Conference of University and Sport Association (CUCSA) in 2014 and being awarded best player of the year in 2013 at Jeppe High School for Boys where he attended.

Wits FC coach Karabo Mogudi described Hlehle as an outspoken and intelligent player who makes the team tick. “His performance so far have been good as he delivered the cross for our first goal of the Varsity Football Tournament,” said Mogudi.

Hlehle is currently playing in the Varsity Football Tournament and he will also be representing South Africa in Zimbabwe at CUCSA tournament next month.