The African National Congress (ANC) is not just confident of retaining the metros it already governs, such as Johannesburg and Tshwane, but the party has dreams of regaining Cape Town from the Democratic Alliance.

“Mayibuye iANC eWestern Cape mayibuye (May the ANC rule the Western Cape once again),” the Gauteng ANC chairperson Paul Mashatile, told thousands of supporters gathered at the Ellis Park and Joburg stadiums for the party’s Siyanqoba (We are conquering) rally. 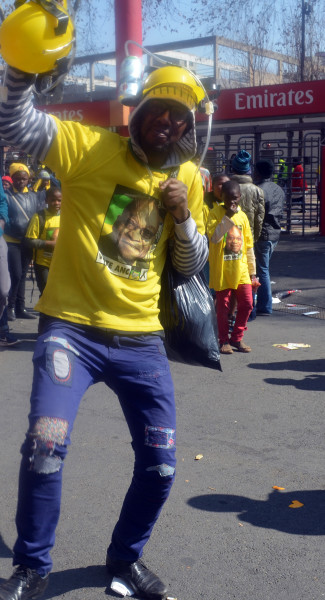 SIYANQOBA: ANC supporters are ready for the elections this Wednesday. Photo: Nozipho Mpanza

Attendees at the event were in high spirits throughout the day as they chanted the anthems of the party.  The official proceedings were run by National Chairperson Baleka Mbethe who sported ANC regalia from head to toe.

The gathering kicked off with an address by actress, Leleti Khumalo, best known as the leading lady of the film Sarafina. Speaking to the roaring crowd, Khumalo said, “There is no doubt that the ANC will deliver on what it articulates.” She followed with a chant of the phrase “Asinavalo”, meaning “We are not scared”, to which the crowd responded in the affirmative.

President Jacob Zuma promised to create more employment opportunities for the youth following these elections. He highlighted developments such as the Maboneng precinct in the Johannesburg CBD and Wi-fi in Braamfontein as examples of the ANC’s successes.

Various speakers warned against voting for opposition parties saying that it would be a setback for the country. “Let us not sell our country back to apartheid” said Pastor Bafana Zondo, who is famous for selling anointing oil and water to his Living Waters Ministries congregants. He continued with a prayer where he asked God to “let the ANC rule forever”.