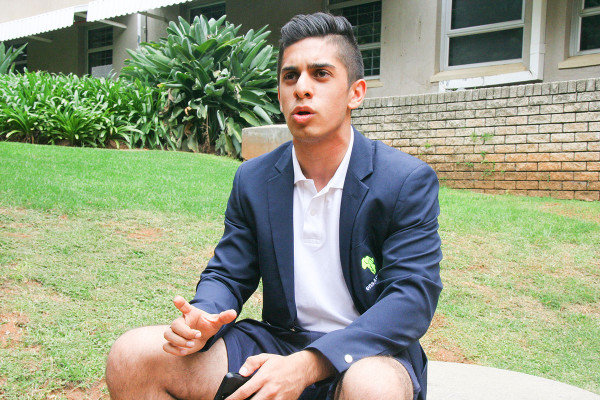 A WITSIE is part of the South African delegation to the One Young World leadership Summit in Ottawa, Canada, later this month.

This conference invites young people around the world to “empower them to make lasting connections to create positive change”. Final-year LLB student Zareef Minty, 22, will be attending the annual event in Ottawa. Minty was part of the Mail & Guardian Top 200 Young South Africans 2014 and won this year’s One Day Leader season four.

“This is first time I will be attending the conference. I am very excited,” said Minty. This is an opportunity where “a large number of young people who have similar interests will come together,” said Minty. The week-long conference starts on September 28th and runs until October 1st. It is an annual summit where the youngest people from global and national companies, NGOs, universities and other forward thinking organisations are joined by world leaders, acting as the One Young World Counsellors.

A One Young World delegate is someone who is aged between 18-30 and has demonstrated leadership ability and a commitment to effecting positive change. Over 20 other South Africans will be joining Minty, including One Young World ambassador and entrepreneur Malibongwe Xaba who has previously attended the summit. Xaba, 30, said “this is my third time going to the One Young World summit. This year I will be in collaboration with One Young World to launch a campaign #WorldWelove.”

This is a campaign to get young people involved in demonstrating via social media the world they wish to live in. Xaba said: “Having been to previous One Young World summits, in Dublin (Ireland) and Bangkok (Thailand), which were both great, I expect that Ottawa will be the greatest.” This year the line-up of counsellors includes keynote speakers Sir Bob Geldof, Kofi Annan, Professor Muhammad Yunus and Mary Robinson.

South Africa’s out-going Public Protector Thuli Madonsela and legendary musician Cher are also in the line-up, amongst others. Both Minty and Xaba received sponsorship from a company that would prefer to remain anonymous. “Our sponsors are not looking for credit or exposure, but they did it in goodwill,” said Minty.