Participants at a public meeting in Forest Town, Johannesburg, slammed the media coverage of, and public support for, the #FeesMustFall protests along with government’s response. The meeting which was held at the St Francis in the Forest Church yesterday, was facilitated by a group of academics from the University of Johannesburg (UJ) and Wits University and was aimed at finding ways in which parents and academics could assist with the current situation at universities. 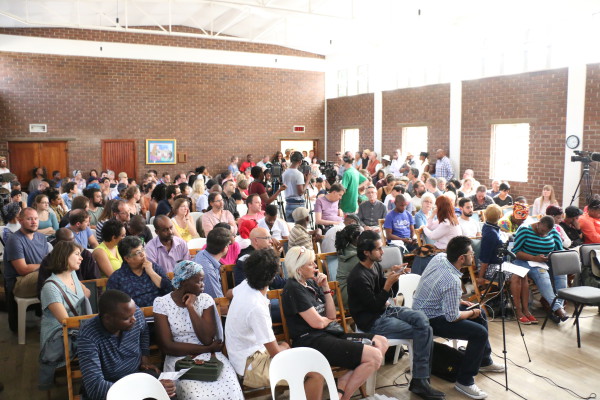 Sipho Singiswa of Media for Justice called parents “pathetic nutcases” for only joining in to support their children after they had experienced police brutality. Singiswa said the government would continue to take advantage of students because there would be no public outcry.

“You did the same thing in 1976, In 1976 I was a kid who got brutalised. What were the parents saying? They were prisoners of their fear.”

“Where were you when events that lead to the burning of libraries were happening? You’re so easy to run to a burning library and condemn it. It is very pathetic,” said a Wits student.

The student added that the media was also obsessed with framing protesters as being violent aggressors. She said as a student who captures the protests from the forefront she has noticed how the media always captures visuals from behind the police.

“When violence at Wits happened … you media were very quick to stand at the side of the bouncers and direct your cameras where students were.”

Wits SRC Secretary General Fasiha Hassan also pleaded with parents to come on the ground and see what is actually happening when violence breaks out.

Hassan asked for donations for the many students who are currently sleeping at Solomon House and are in need of resources and support.

Dr Prishani Naidoo, who was chairing the meeting, noted the suburban church venue was inaccessible to people living in the townships whose children were on the forefront of the protests. Naidoo said more meetings like this would be had at more relevant venues in future.

More comments came from the audience saying that the fees struggle had moved away from a student issue to a national issue. Calls were made to mobilise greater society behind the students in order to force the hand of the state in committing to the realisation of free education

The gathering has decided to join the mass inter-faith gathering by students at Wits University today to present their proposals which came out of the meeting. There were around 100 people at the church including workers who are cleaners and security at Wits University.