END_OF_DOCUMENT_TOKEN_TO_BE_REPLACED

COSATU will join the Fees Must Fall movement and march with students on October 14. END_OF_DOCUMENT_TOKEN_TO_BE_REPLACED

Protesting students had to abort their plans to march to the Hillbrow police station in solidarity with 31 students who had been arrested earlier today.

The students had gathered at the Wits Education Campus and had said they would go back to the main campus via the Wits Business School and the police station. However, Busisiwe Seabe, one of the protest leaders, told the protesters that the police had threatened to shoot if students moved in one large group. She said the police wanted the students to move in groups of two or else there would be violence.

The police also wanted the students to stay off the main roads but they later authorised the group to move via Empire Road towards the main campus.

Seabe, however, vowed that the protesters would continue to move forward, adding that the leaders could form a chain around other students in order to protect them. “They must shoot us before they shoot you,” she said.

The student leaders requested the media to move to the front in order to allow them to keep students in an organised formation.

The students continued to chant and dance while making their way to the Empire Road entrance in order to continue the shutdown of the Wits Main Campus.

END_OF_DOCUMENT_TOKEN_TO_BE_REPLACED

#Feesmustfall2016 Explained: Why Witsies are protesting 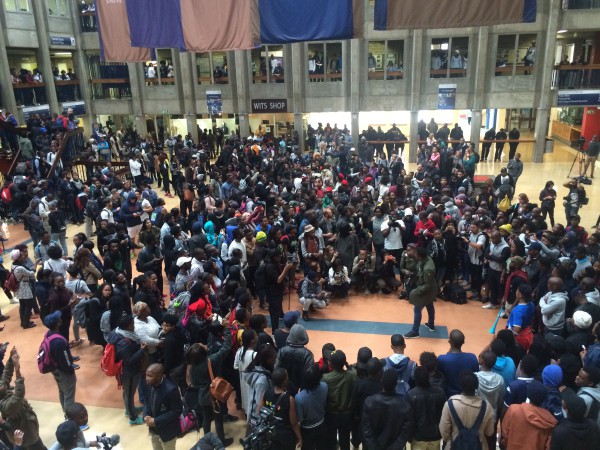 ASSEMBLE: Students begin to organise at Solomon House on Monday following a fees announcement by Minister of Education Blade Nzimande.

Let’s say you were in a lecture yesterday when email came in advising you to leave campus because a protest had broken out. Even better your tutorial was disrupted by a group of protesters calling for a campus shut down.

You’ve checked your Twitter feed to get the scoop on what’s actually happening and although you have an idea of what #Fees2017 means, you require a lot more clarity on the issue?  Well we hope the next few points will clear things up for you.

What did Blade say?

In yesterday’s press conference the Minister of Higher Education and Training Blade Nzimande announced that university councils had to determine their own fee increases for 2017, however the increase should not be above 8%.  This increase would not apply to students on the government loan scheme NSFAS and students belonging to the “missing middle” whose families earn too much to qualify for NSFAS but too little to afford fees. In Nzimande’s definition this would be students whose families make less than R600,000 a year.

What does this mean for students?

So essentially students that qualify for NSFAS and are granted the bursary will pay the same fees in 2017 that they paid in 2016. Nzimande says students who make up the missing middle will also in effect pay the same fees as 2016, with their 8% increase subsidised by the government.

In other words rich students have to pay the 2017 increase.

So then why are students protesting?

So far students have said they were protesting because they felt that the real issue of free, decolonised education has not been addressed since last year’s protest. But there is not agreement on what free education means, who should get it, as well as when it should be realised.

On the other hand the Wits SRC, which constitutes of only ANC-aligned Progressive Youth Alliance (PYA) members, have called for a moratorium on all fee increases until free higher education is attained.

Students have also complained about the fact that a fee “freeze” is not the same as a fee reduction. Students who were struggling with fees in 2015 and 2016 are likely to face the same problems in 2017 if fees remain unchanged.

So what’s certain at this point?

Two points. Students have rejected the work of the Fees Commission saying instead of looking into the “feasibility” of free higher education the commission needs to focus on how to make it a reality. Students have also asked for the proper implementation of insourcing for workers a move which they say will bring dignity to the workers.

Who is involved in the protest?

Several parties are involved in the movement. Monday’s meeting was called by the Wits SRC, however the Wits EFF and Fees Must Fall–a nonpartisan movement, are also key role players in the protest. In last year’s protests workers joined in solidarity with the student’s call for free education as well as their own issue of insourcing, but they have not been present in this week’s protest so far. It is unclear whether they will join the students at a later stage.

Okay thanks for all that, but what does this mean for the academic programme?

Well classes could be delayed slightly or severely which probably depends on whether the students demands are going to be addressed in a positive manner. It depends on how students and the university deal with each other. Students have vowed to keep campus shut down until their demands are met, meanwhile the university has sent out communique which called on students to come to campus because it will be business as usual. Some arrests of student protesters by the SA police service have already been made.

We will just have to wait and see how the day unfolds as well as the protest at large.

Wits University students have embarked on a shutdown of the institution after the Minister of Higher Education failed to announce free education at a press conference earlier this morning.

Minister Blade Nzimande said universities needed to determine their own fee increases but added that this increase should be capped at 8%.

Nzimande added that government will absorb the cost of the increase of the “missing middle” and students on the NSFAS scheme and anticipates that this coverage will cost approximately R6,5-R6,6 billion. According to Nzimande, the “missing middle” refers to households earning less than R600 000 per annum.

Responding to comments about potential protests at campuses around the country, Nzimande said that higher education is not free and that a moratorium on fees “means you are campaigning for the rich”. Nzimande says that those who can afford to pay for tertiary education adding that government was unclear on how parents can send their children to private schools and yet expect to have their tertiary education subsidised.

Responding to the announcement by the minister, incoming SRC president Kefentse Mkhari told a gathering in Solomon Mahlangu House: “Basically what the minister is saying is that there will be a fee increase so the university must shutdown.”

The official shutdown is set to start tomorrow as protest leaders move from venue to venue to gather more students. Wits vice chancellor Professor Adam Habib told Wits Vuvuzela that is currently overseas in New York at a UN General Assembly for the launch of HEforSHE campaign. Wits spokesperson Shirona Patel said: We will consult with stakeholders and make further comment afterwards.

Wits SRC has announced plans to shut down the campus under the banner of #FessMustFall2016 should the Minister of Higher Education and Training Blade Nzimande announce a fee increase at a highly-anticipated press conference later today.

Secretary General Fasiha Hassan said the SRC has invited students to gather at Solomon Mahlangu House, (Senate House), to watch the minister’s announcement about the recommendations of the Fees Commission. It is expected that Nzimande will definitively answer the questions around possible fee increases.

Hassan said if today’s announcement was unfavourable, “we will have to do what we did last year that is take to the streets”.

In a statement released a short while ago, Wits University says that “security has been strengthened and the police is on standby this week. We remind all colleagues and students that an interdict remains in place to protect staff, students and University property”.

Hassan says today’s gathering will also address the issue “that the focus cannot be on a fee increment but rather on free education”, a point missed by the government and universities.

The SRC noted that the anniversary of the 2015 FeesMustFall protest is drawing closer and yet the implementation of their demands has been slow and half-hearted.

Wits EEF Student Command chairperson Koketso Poho said if it came to it Wits EFF were ready for a shutdown.

At a townhall meeting with students in August Wits Vice Chancellor Professor Adam Habib said Universities South Africa (USAf) had told the higher education ministry that they needed an additional 8% income. “That doesn’t necessarily mean a fees income. We hope that 8% could come from government subsidies,” said Habib.