All academic activities at the University of Limpopo have been suspended with immediate effect. In a statement released today from Vice Chancellor Mahlo Mokgalong’s office, all students were instructed to vacate residences by 17h00 as the university would be shut down indefinitely.

The university management said it had been forced to shut down the university after incidents of violence by protesting students. On Monday, September 26, students came back to campus from a week’s recess, and promptly joined the countrywide Fees Must Fall protests. After students clashed with police, three students were arrested and a number were injured.

Student Representative Council deputy secretary general, Elliot Saasa, told Wits Vuvuzela that the SRC distanced itself from any violent behaviour. He said they were aware that violent groups of students had been mobilising under the banner of Fees Must Fall. “At the moment students are angry about the attacks by police and the campus security personnel,” said Saasa.

Saasa also said on Tuesday students had been left in the dark when the university cut off electricity all over the campus, including residences. “The safety of students was compromised when an alleged rape was reported by students,” he said.

However, Selepe said he had no knowledge of the alleged rape. “That rape matter has not been reported to the university,” he said, and denied that it was the university management that had cut off electricity. “This is not a university issue but an Eskom problem, which was sorted out this morning,” Selepe said.

Faith Leope*, a final year Information Studies student, told Wits Vuvuzela that, there had been a fire at one of the residences, MBL, on Tuesday night and some of the students’ belongings were stolen. “Our lives are not safe,” she said.

Selepe confirmed the MBL residence fire, but pointed the finger of blame at students protesting for #FeesMustFall. “I can’t comment on the issue of safety,” he said, “because we as management have to sit down and talk about a way forward.” 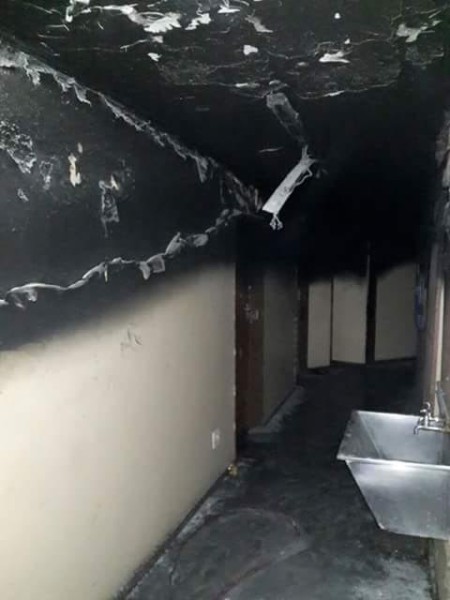 ARSON: One of the University of Limpopo student residences that was destroyed by a fire. Photo: Provided

* Not her real name

Wits Vuvuzela, Anxiety among final-year UP students about impact of closure. September, 27.