‘I told myself that I wasn’t going to protest because on Monday, when we shut down, I saw what was happening. There was a lot of political infighting and it just didn’t seem genuine. We knew what the outcome was going to be. I mean you can’t put your body on the line for zero percent [increase], we want to put our bodies on the line for free education. 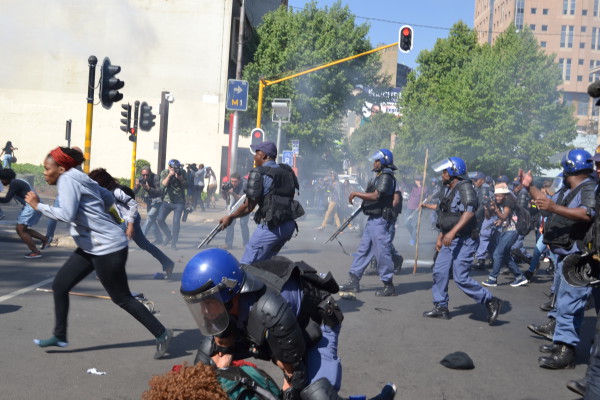 But then on Wednesday I heard about a mass meeting and I was like okay let me attend this meeting. All of a sudden I find myself walking with the masses to Rosebank College until we were blocked by police. Then we came back to campus.

Now at this point I was basically ready to go home but I was just sticking around and then I think an SRC member said, “No guys, go, they have secured a route for us.” So we go, because we’re thinking the cops are going to escort us and it’s going to be fine. So there’s a boom gate and someone is holding it up for us, so we go out. I was behind all the people that were sitting outside the gate.
Next thing I hear gun shots and people were running back. And now you can imagine there’s that boom gate and those holes down there and people were getting stuck, people were getting stampeded.

I was running next to my friend and the stun grenade just came here (motions to the right side of face).
I remember thinking ‘Fuck, I can’t hear anything and this thing has burnt me.’ I was really afraid to look at myself because when I touched my face I felt blood and my ear was deaf on this side (right). You can imagine that thing makes a lot of noise.

We immediately went to Campus Health, and the one entrance was closed so we had to go around. It was frustrating because you just want to be still in that moment.
There were three of us who were injured and a lot of others who were trying to help and we were so traumatised.

Campus Health then referred us to Milpark Hospital where they put bandages on to soothe the burn because you can imagine blood, scars and teargas all burning in your skin, it was horrible! They also told me that a certain membrane in my ear was torn, like it’s flapping. They told me when the inflammation goes down it will heal.

There was a Rob Sharman from the university at the hospital. He told us whatever outstanding costs we have we should speak to him and he will sort it out. So I have been speaking to Rob through Xola and the others in the health and wellness task team. They said they are waiting for the university’s response. I don’t know what’s happening.
The only thing is that I need sunscreen and tissue oil, it’s been difficult because the medical aid doesn’t cover that stuff and you have to choose between that and food. I have been trying to get people at Wits to help me out and they haven’t yet.

My mom is the only one supporting me and maybe if I really need something I will tell her. I don’t want her to worry too much. I am just trying to have her think I am doing okay.
Because the people who are helping me are helping a lot of people. They say “anything you need we got you” and I tell them and then they take a while. I suppose it’s because they don’t have the finances themselves, I don’t know. I am just a bit concerned about my mental health. I can’t sleep because I am startled by noises. There is a TV room next to my room, they laugh so loud and speak loudly, bang doors or drop things in the kitchen.

Even with going outside, like when I go to the kitchen they would try to give me advice on what to do with my face and it’s just like I don’t care, who are you, go away.
What’s really sad is abantu have a lot of trauma over these protests and they [the leaders] let these first years protest and they get traumatised and hurt, then babayeke nje [they just leave them]. It’s not healthy.