Parents of FeesMust fall protestors have made their own movement to stand in solidarity with the students.

Parents that are supportive of the #FeesMustFall protests have, this week, decided to travel across the country to rally other parents to support the movement.

The Higher Education Parents Dialogue (HEParD) want to achieve “ten tasks for ten days”. The ten day mandate is for the organisation to mobilise parents in each of the country’s nine provinces, and to set up a committee consisting of a representative from each province. The ten-day period started on September 23.

“We don’t want to be spectators anymore; we are saying we need to engage civil society. We are setting up structures and we want the minister to engage with us as a cluster of parents,” said the chairperson of HEPard, Irvin Phenyane.

According to Phenyane, the organisation stands on the side of the students on the subject of free education.  On its objectives, HEParD lists the need to address the gap between policy and implementation of tertiary education in South Africa as well as the institutional failure to implement  tertiary education successfully. 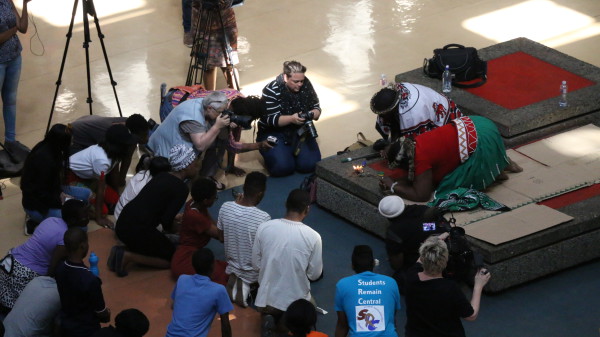 BLESSINGS ON BLESSINGS: Members of various religious and traditional backgrounds pledged their allegiance to the call for free education

Despite its ten-day target, the group is aware of the time constraints and the improbability of mobilizing all the provinces successfully.

“Our first blame is that we are coming in too late,” said Phenyane who believes that parents should have been involved in the movement earlier because of their ability to give a voice of authority on the matter.

HEParD has committed to addressing the safety of students facing police when they are protesting outside their campuses.

“Most of us have spent our university years in detention, fighting these systems. We need to play the role of negotiating with these students,” said Phenyane.

Members of #FeesMustFall have responded positively to the involvement of their parents in the movement. “It’s good to have them as supervisors because then it stops being a student movement and starts being a community movement,” said chairperson of the #FeesMustFall medical task team and final year Wits medical student Chuma Tshekela.

Although entering at a late stage, HEParD has assured students that it will protect them throughout the journey. “Every revolution has a start date but it doesn’t have an end date, it has an end goal,” said Phenyane.