The academic programme at Wits University has been suspended until Monday, October, 10. The announcement from the university’s Senior Executive Team (SET), came late on Monday evening after day long protests which saw police releasing stun grenades, firing rubber bullets and throwing tear gas cannisters at protesting students. The decision to suspend the academic programme was reached after consultations with a number of stakeholders including the Wits SRC, former presidents of the SRC and members of civil society. In addition, the university has announced that it will convene a general assembly, the first since 1987.

“We have made this concession because we do not want the scenes that played out on our University campus today, to be repeated,” read an email from the SET that was addressed to Wits staff and students last night. 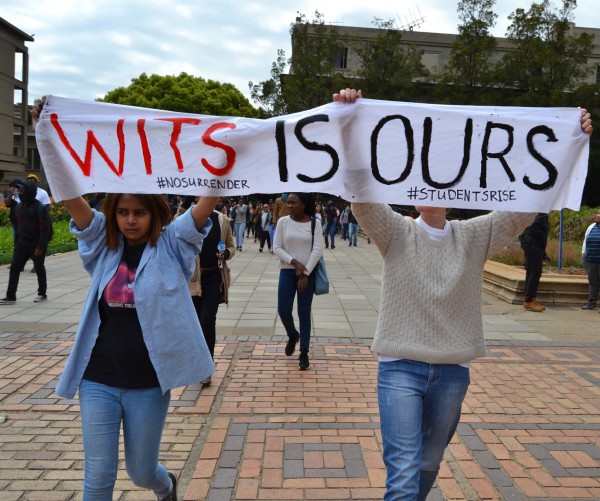 A group of protesters came from the Wits Art Museum towards the Great Hall with ‘bannermen’ in front. Photo: Candice Wagener

The announcement followed a day of violence on the Wits main campus.  Students were met with stun grenades and rubber bullets from the SAPS on their first day back since class was suspended last week. SAPS opened fire early in the day on students who were marching from the Wits Science Stadium.

“In my quest to find out about the student that was captured by police, I was arrested for asking too many questions,” said Seabe from inside the police van following her arrest.

Students gathered once again on the plaza and proceeded to West Campus where they evacuated students attending class from the buildings. The protestors grew in their number during the mobilization and they proceeded to Yale road.

The movement was joined by public figures such as Dali Mpofu and Simphiwe Dana who offered themselves as human shields for the students against the police. 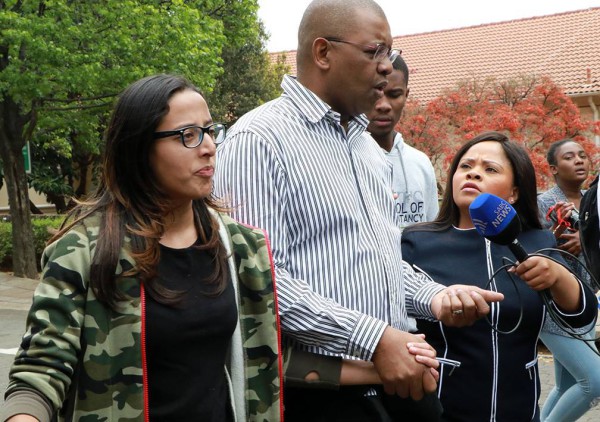 Advocate Dali Mpofu speaks with the SABC about his role in calming the police on campus. Photo: Dinesh Balliah.

More stun grenades and rubber bullets were fired at the students as they gathered on Yale road and the crowds dispersed, with many moving towards the Great Hall.

The violence escalated as the SAPS chased the students around the campus and students began retaliating by throwing rocks at the police and damaging their vehicles.

The next couple of hours saw a tense standoff between the police firing ammunition and the students throwing rocks. A group of women protesters resoprted to removing their tops and bras to try to stop SAPS from advancing on the students.

Later in the day, a delegation of students proceeded to the Hillbrow police station to await the release of the five students that had been arrested. 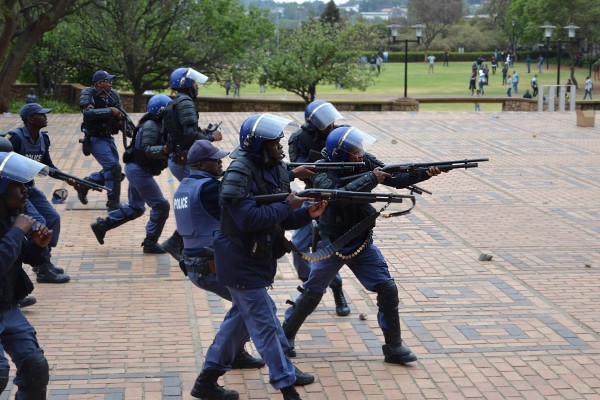 Clash between police and students, police advance closer to the crowd of protesting students while rocks were being thrown, rubber bullets were being fired.
Photo: Candice Wagener

“We are here with our legal team to try and force the release of our comrades,” said student leader Mcebo Dlamini, who himself had thinly escaped being arrested earlier in the day.

As the sun set on the day’s events, it appeared that an impasse had been reached.

At 6pm, Wits announced that classes would continue as normal tomorrow but a statement close to 10pm saw the university change its decision, opting to suspend classes following a meeting with external mediators.

Protesters remained adamant that they will not return to class until they have been engaged by management about their matters of concern.

“We are not demanding free education from Habib. What is he? He can’t give us free education, so he mustn’t make himself feel important,” said Dlamini.

The announcement about the suspension of academic activities was agreed to by all parties, according to Wits’ statement.

The general assembly will be held at Wits on Friday, October 7, to discuss the prospect of a free, decolonised education.

Wits Vuvuzela,  As told to : I am completely against #FeesMustFall protests,  October 2, 2016

Wits Vuvuzela, “We are agitated due to comparison”: the students of #FeesMustFall, October 1, 2016