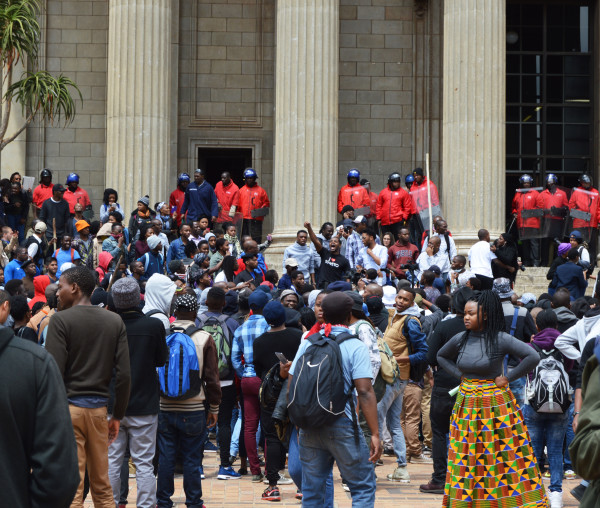 Wits University and members of the Student Representative Council (SRC) will hold a general assembly on Friday, October 7 following a three-week period of student protests.

On Monday, September 19 the Minister of Higher Education Blade Nzimande announced that the vice-chancellors of respective universities would need to decide on a fee increment for 2017 but recommended an increase of 8% for students whose families earn more than R600,000 a year.

Some Wits students immediately began protesting and attempted to disrupt lectures which later led the university to announce that academic activities would be suspended for one week. Approximately 1000 students continued to protest throughout the week and there were occasional clashes with police and private security. On the Wits SRC Twitter account they condemned the use of violence by police and private security stating that they only intended to engage in peaceful protest.

Wits condemned all acts of violence and stated that both police and private security would remain on all campuses. On Saturday, September 24 Wits released a statement saying that all university activities had been suspended until further notice following the discovery of three petrol bombs on Main Campus.

The university received many calls and emails calling for the academic programme to resume leading Wits to run a poll asking all staff and students if academic activities should resume on Monday, October 3. On the Wits SRC (Student Representative Council) Twitter account a statement was released saying that they believed the poll was an inadequate response to the crisis. Fasiha Hassan, the SRC secretary general said that ultimately the SRC would like a university assembly to allow all students, workers, staff and management to discuss the issue.

However, the university continued with the poll and approximately 17 000 students, about 77% of those polled, and 2 000 staff members voted to have the university reopened on Monday, October 3. Following discussions with various stakeholders and students, university management decided on a phased opening whereby staff would return on Monday but academic activities would resume on Tuesday, October 4.

The senior executive team also said they were left with no choice but to keep police and additional security on campuses but would gradually reduce their presence if there were no incidents of violence. However, on Tuesday when academic activities resumed, there were violent clashes between protesters, police and private security.

Senior management, SRCs, former leaders from the Black Student Society as well as some members of the clergy entered into negotiations in order to discuss possible solutions as well as to salvage the rest of the academic year. These negotiations led to the senior executive team to announce that once more academic activities would be suspended.

Wits Vuvuzela Fees Must Fall: The Fourth of October, October 5

Wits Vuvuzela “We will not have Habib’s Marikana”, October 4