The DST-NRF Centre of Excellence in Strong Materials hosted the deferred 2016 Materials Science Poster Competition prize-giving at the Wits Club. 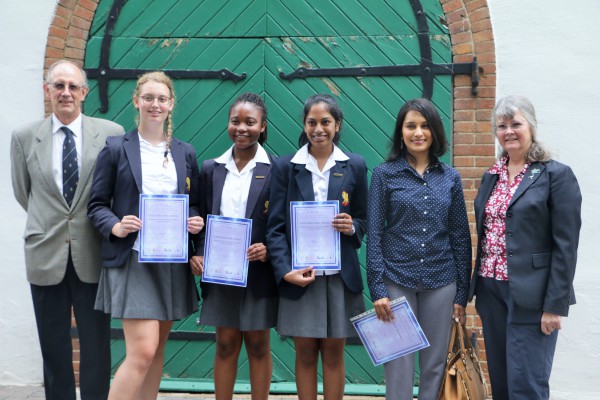 Hyde Park High School walked away with the top prize at the 2016 Materials Science poster competition prize-giving held at Wits University earlier today. Gugulethu Ndlovu, Daniella Ferro and Jaydeen Govender won a cash prize of R15, 000 for their poster on Lonsdaleite which is also known as an hexagonal diamond.

Grants and operations coordinator for the DST-NRF Centre of Excellence in Strong Materials, Jacqui Jacobs says, “This competition has been formulated to attract more learners to the field of Material Sciences and hence develop their knowledge of properties and learn about the applications of strong materials.”

“This competition is aimed to give back to the community and educate learners about material science … Material Science is not widely advertised,” says Jacobs.

Learners from the second placed school, The King School West Rand, Eva Cheng, Nicole Botes and Nicole Hakutangwi said “teamwork played a big role in working together a group especially as friends, it was a lot of fun.” “There were a few arguments about what we should do in terms of the themes and layout, but it was an awesome experience,” said Botes. The team was rewarded with R10,000 for their effort.

The third place, and prize of R 5,000, was shared by The King’s College and Preparatory School (Bryanston).

Awards were handed over by the Director of DST-NRF Centre of Excellence in Strong Materials, Prof Lesley Cornish, the Dean of the Faculty of Science at Wits University Prof Helder Marques, and coordinator Prof Deena Naidoo.