Eight Wits academics were honoured with A-ratings at the National Research Foundation (NRF) awards ceremony held in Polokwane last week while another two were recognised for their outstanding research.

The annual awards are aimed at recognising and celebrating research excellence at universities and research institutes across South Africa. Professor Nosipho Moloto from the Wits School of Chemistry was honoured with the Research Excellence Award for Early Career/Emerging Researchers award for her work in nano technology, more specifically quantum dots. 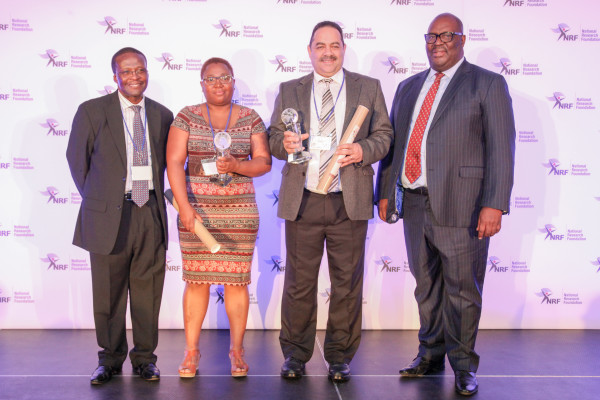 Moloto uses nano materials to find cheap and efficient solutions in solar cells, gas sensors and as biolabels for early diagnostics of diseases.

Moloto said it was great that her work was receiving recognition and she hoped that her work would inspire young female scientists. “I want to show them that it’s possible, especially for someone with my background who went to school in KwaMashu and attended the University of Zululand which was a previously black university. It’s not easy to find role models and I hope I can be that example.”
Professor Lee Berger from the Evolutionary Studies Institute at Wits secured the Excellence in Science Engagement Award. He is widely known for his work in the area of palaeoanthropology, specifically the ground-breaking research on the hominid fossil discoveries of Australopithecus Sediba and Homo Naledi during the Rising Star Expedition.

A-ratings are given out to researchers whose work is of the highest quality and has a significant impact.

New A-ratings were awarded to Professors Florian Luca of the School of Mathematics, Lenore Manderson of the School of Public Health, Achille Mbembe of the Wits Institute of Social Economic Research, Lynn Morris of the National Institute for Communicable Diseases and Charles Feldman of the Department of Internal Medicine.

Professor Claire Penn of the School of Human and Community Development received her A-rating for a second time and Professor David Lewis-Williams from the Rock Art Research Institute was awarded an A-rating for the third time.

Professor Norman Owen-Smith from the School of Animal, Plant and Environmental Sciences got one for the fourth time.

“It feels great when you are recognised so that you know that you are not working in isolation” said Owen-Smith.