FOUR WITS University students, all members of Mountain Club, will participate in the Gauteng provincial finals of the national boulder league (NBL) over the weekend.

Sisters Gabriella and Sabrina Veiga, Lawrence Marshall and Steve Hoff will be representing the club in the provincial finals at the Boulder Cave.

The league which comprised six rounds with 12 routes per round will culminate in the finals on Saturday, March 11. The league initially consisted of six consecutive weeks of competitions which were hosted at Wits. Each round had different routes ranging from one to 12. “One being the easiest and 12 being the hardest,” said the chairman of the Wits Mountain Club, Marco Mons. “Hosting a league as big as the NBL has been an accomplishment for the club,” Mons said.

Honours student Jean van der Merwe has been climbing for four years. For Van der Merwe climbing is about competing with gravity other than competing with other people. “I got hooked when I was first introduced to climbing,” he said. Beginners are encouraged to compete in the NBL because it helps them to “learn and understand how problems work,” said Mons.

Second year Bachelor of Biological Science student, Daniel Kapelus, said that “after a stressful day you can just be physical and let your stress go, refocus your mind and have a laugh with friends. Go home rejuvenated and have a good night of studying.”

According to Mons, climbing is about focus, concentration and balance. He believes that it helps him in his academic work. “Climbing stimulates you mentally and physically. In a test you can realise that I kept my cool… I can do this,” he said. 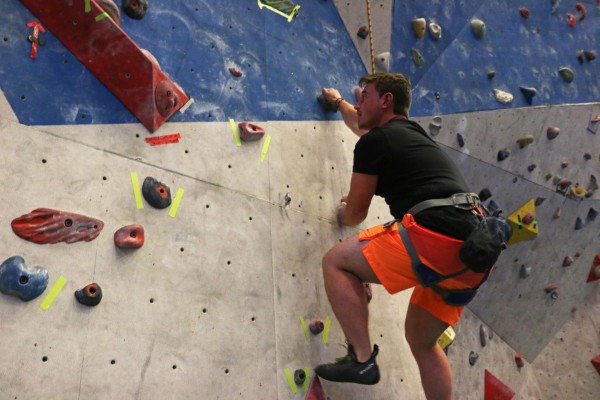