Wits students have accused university officials of allowing access to campus facilities by individuals who are not part of the Wits community. They say students from other institutions, and even the homeless, have access to libraries, computer labs and university buses.

Thabiso Baloyi, a third-year BA student, told Wits Vuvuzela that he had seen non-Witsies using the computers on the first floor of Solomon Mahlangu House late at night. “I saw a guy at the computer lab who looked like a hobo. He was smelly, sitting in the second row and everybody sitting [near] him left. He was using the computers and sleeping there,” Baloyi said.

Baloyi also related a story from last week about his friend who had logged onto the computer and stepped outside. “When my friend left after logging on the computer, this guy came and logged into Facebook. Then my friend came and asked him to leave.”

The fact that the person had left four unoccupied computers and decided to use the one that had already being logged in with a username, is what made Baloyi think he was not a student. “When my friend confronted him he immediately left. It’s like he was waiting for us to login so he can use the computer,” Baloyi said.

Wits librarian, Paiki Muswazi, said there were specific situations where the library allowed non-Wits members to use the library. “We allow reciprocal access. If there is a postgraduate [student] from UJ who wants to access material at Wits, they will get a letter of introduction, and come to us. We will give them access,” he said. 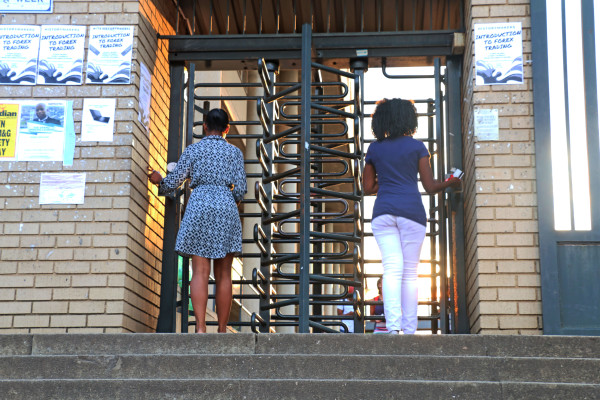 Another third-year BA student, Yaya Rathbone, told Wits Vuvuzela that non-Wits members have easy access to the university’s facilities because the security is not tight enough. “In Solomon House if you don’t have your student card you write your student number down, which can be valid or invalid,” she said.

Security personnel have no system to check the accuracy of the information provided, Rathbone said. “They don’t do a follow up, they just let you in.”

Last Friday, Wits Campus Control confirmed that a man who is not a Wits student was arrest on campus for theft. Wits Crime Prevention and Liaison officer Mashudu Khumela, said the arrested individual used a student card of a registered female student to access the campus.

Campus Control Director, Mokgawa Kobe, said his office was not aware that non-Wits students have access to Wits facilities. “If there was a non-Wits student who attempted to access our facilities, where there’s access control, that student will not have been allowed, because the first thing you will have to do is produce a card, and you will have to swipe, so for that reason nobody other than our students could access the facility.”

Mokgawa said they did random patrols to ensure that there were no criminal activities. “One of the challenges we have is that we are using a card system, which is the only system we have. We have incidents here on campus where we have arrested criminal elements in possession of student cards. Sometimes the student was robbed, the card was lost, they pick it up, they came here and try to look for luck,” he said.

Wits Vuvuzela, Arrest at Wits in connection with theft, March 10, 2017