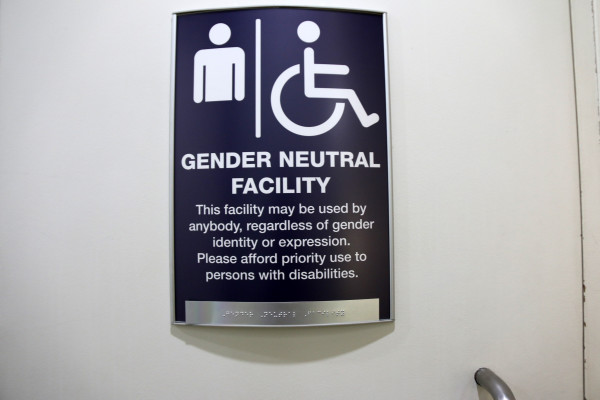 Neutral Point : An example of the new signs on campus
Photo: Gypseenia Lion

Gender-neutral bathrooms fill the premises of the University of the Witwatersrand. The bathrooms are located within a number of Wits campuses. The projects coordinator, Tish White (Senior Administrative Assistant) has confirmed that there are 33 functioning gender neutral bathrooms at Wits in central places.

There are also three located on Education Campus, one at Medical School, 16 on West Campus and 13 on East Campus. White said if there is a need for more of these bathrooms, more will be built – however, at the moment they feel they have covered “campuses comprehensively”.

Pfunzo Rauphabana, a second year Computer Science student, said he does not see a problem with the bathrooms. “They are normal,” he said. Third year International Relations student Ntombizanele Mkhombo said she did not really know about the gender-neutral bathrooms and where they are located, however, she would use them if she knew. She said the university should make more of an effort to let the university community know where the bathrooms are located.

Third year triple major BA student, Nosipho Nxumalo, felt uncomfortable with using the gender-neutral bathrooms. “I am accustomed to the traditional separations in terms of gender … the social constructions have programmed my mind to be comfortable in the bathroom because I am surrounded by like people,” said Nxumalo.