Wits Rugby jerseys on auction, all proceeds to support Othandweni Women’s Shelter.
FNB Varsity Cup is hosting an online auction that will run until the April 16 to commemorate its 10-year anniversary of university rugby sponsorship. This initiative sees the sponsor encouraging university teams to cross over from on-field involvement with Varsity rugby to also take part in off the field social involvement projects.

According to Jaco-Louis Groenewald, Managing Director at ASEM Engage, a PR and digital agency that manages Varsity Cup, “The FNB Varsity Cup presented by Steinhoff International is committed to the fight against women and child abuse.” The auction, which will take the format of a silent bid on the sponsor’s website, aims to raise funds to assist local shelters or organisations that counsel and support abused women.

The Wits rugby team has accepted this call and chosen to support Othandweni Women’s Shelter with the proceeds from the auction as well as other initiatives. 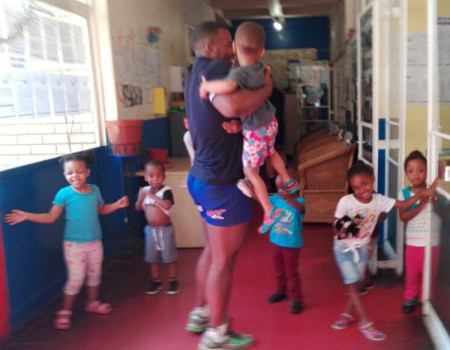 BEASTS ON THE FEILD, TEADY BEARS AT HEART : A Wits rugby player plays with children of Othandweni.

The shelter is able to accommodate 40 women per night at a fee of R15 per night, providing a bed, ablution facilities and a secure, clean environment to stay in overnight.

Having already been to the shelter to help out with repairs and maintenance, first team Wits rugby player Michael Renwick said, “This was a worthwhile initiative and the team really bonded around the experience.” According to Renwick, the experience also required the use of skills gained from their own field activities such as team work.

The auction, falling under FNB Varsity Cup’s Keep the Aggro on the Field campaign, will see the highest bid received for each jersey being donated to each varsity team’s charity or organisation of choice. As of the April 5, the highest bid for the FNB Wits shirt is R555.