Wits bus drivers back at work following threats to their jobs 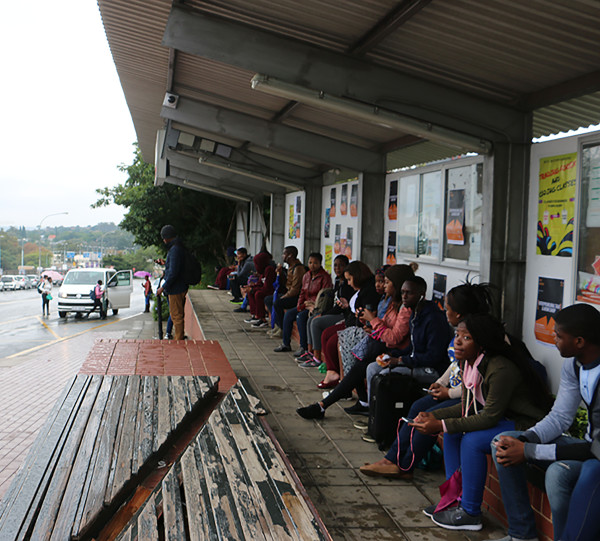 Students at Wits University were left stranded in the rain on Wednesday April 12 as the effects of the national bus strike were felt all around the city.

The bus strike’s effects was felt largely by students who rely on the bus services offered by Wits. Students from the Braamfontein campus who needed to get to the Education and the Medical campuses missed their lectures and tests scheduled for the day. This was a result of the lack of communication by the University to students, said a second year bachelor of education student waiting for a bus on main campus.

Some day-students who utilise other bus services such as the Metro bus, Rea Vaya and Putco were also affected by the strike as they struggled to get to the University only to find that the buses at Wits were also not in operation. “I take a Metro bus and they are striking, so for me to get here was a problem, now I’m stranded here, and I’m writing a test, what am I going to do,” said  the education student.

“It’s worrying because 280 departures are made every day. All the drivers who are licensed to provide the service are on strike. We have asked Wits services to look into possible contingency plans,” said Rob Sharman, Head of Residence at Wits.

William Mhlanga, driver and leader of the strike, told Wits Vuvuzela that there they were demanding a salary increment from their employers.  Mhlanga further stipulated that “our basic salary is supposed to be R8 000. Wits previously increased our salaries to R7 856 but Phola Coaches isn’t giving us that money, we’re still getting R6 500. So the busses will be parked until everything is sorted out.”

The Unions’ demands for the workers include the implementation of the national salary increment of 15% for bus drivers and that they pay them separate from their salaries for additional trips that exclude transporting students.

An agreement was then verbally made when the drivers met with Phola Coaches management late on Wednesday to negotiate the drivers’ salaries. The drivers were then  granted a 10% increment, on condition that only four drivers and four buses were released and that some bus operation continues.

The bus drivers said Thursday, that their management made them sign the 10% agreement following a meeting that was called earlier. They alleged that their management sent senior staff members to alert them that if they continued striking they would be kicked off Wits premises and lose their jobs. The say that the circumstances under which they signed the documents were threatening. The drivers say that they were left with no choice but to settle and agree to a 10% increase on their basic salaries and a further 5% increase on their travelling and accommodation (for drivers who do not utilise the staff rooms provided for them) allowances.