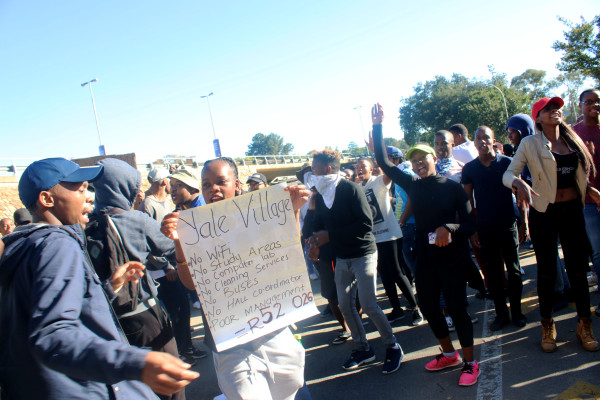 RESIDENTS from Wits University’s Yale Village burnt a tire in protest and blocked the institution’s Empire Road entrance on Thursday morning.
The students are up in arms over the alleged lack of service delivery in the new residence that opened at the beginning of the year.

A group of 200 students gathered from 6:30am to hold a demonstration. Students and staff had to use alternative entrances into the university.
The protest also prevented buses from entering the campus on Empire Road, as they use the gate on Enoch Sontonga Avenue to exit.

Sabelo Ngubeni, a Yale Village house committee chairperson told Wits Vuvuzela that “This is not a protest that seeks to disrupt, we just want our demands to be met.”
Some of the issues the students are complaining about are the harassment of female students by homeless people living under the bridge by the Empire Road entrance; the lack of cleaning stuff, which leads to students getting sick due to hygiene issues.

He added that there were only four cleaners for about 320 students and additional cleaners are yet to be deployed at the residence.

Students also complained about the lack of wi-fi in the residence which impacts on the academic performance of students as the university uses a huge percentage of internet for Sakai, emails, online submissions and online tests.

Another burning issue is security, as students complain about getting mugged in and around the residence area. The residence only has a bus that operates between 06:15 and 07:30am.

The students also complained about the lack of maintenance of the residence as they have complaints about taps and toilets not working.

“It’s not a matter of the university not having enough resources or not being capacitated to deal with these issues. It’s a lack of will from management,” said Ngubeni.

Rob Sharman, Head of Residence Life and the Dean of Students Dr Puleng Lenka-Bula arrived on the scene in an attempt to address the students but the two of them were turned away and told by the protesters that they do not recognise them, the only person they wanted to engage with was the Vice Chancellor Prof Adam Habib, his deputy Dr Tawana Kupe or Prof Andrew Crouch.

The students finally handed over the memorandum to Chief Operations Officer Fana Sibanyoni and Dr Lenka-Bula.
Campus Protection Services (formerly Campus Control) were on site to manage the situation, while the South African Police Services were on standby.

Previously, the Yale Village students occupied the office of the dean of management on March 8 to address these very same issues. According to Ngubeni, the only thing that was fixed after that demonstration was the implementation of lights underneath the bridge and buses for the residence.

On the scene there were a number of campus control securities, five JMPD vehicles and a police mini bus and a vehicle.