Wits Woman of the Year in Healthcare

Wits student named Woman of the Year in healthcare.

WITS student, Shakira Choonara, was named Woman of the Year in the healthcare category at the Woman of Stature (WOS) awards earlier this month, beating two other competitors to take home the prize. 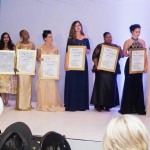 Shakira Choonara (second from left) and the night’s other winners.

The nominations for the awards are a closed process, where previous nominees and winners nominate women in their respective fields.
Choonara, a doctoral research fellow in the School of Public Health, says that she has always had a passion for healthcare and that she drew on her own experiences when deciding on this field of study. “I grew up under impoverished circumstances and at a very young age, I witnessed and experienced the difficulties associated with accessing public healthcare in the country,” she said.
Choonara has since gone on to use those experiences by getting involved in a number of programs that advocate for the improvement of public health across sub-Saharan Africa. She has worked on HIV/AIDS and malaria projects and has been part of the Resilient and Responsive Health Systems (RESYST) project.

The RESYST project aims to improve governance in low-and-middle-income health countries such as Kenya, Nigeria, Vietnam, Thailand and South Africa.
However, her focus is not solely on healthcare, she also advocates for non-racialism and she is also a volunteer at the Ahmed Kathrada Foundation.

“I believe there is an evident need for health systems to serve vulnerable populations, as such I raise awareness around the plight of persons with disabilities. I am also involved with Anti-Corruption International in Africa.”

In a document nominating Choonara for the National Research Foundation’s next generation award, Professor John Eyles, who has worked with Choonara, says that, “Shakira demonstrated an exceptional ability to conduct and disseminate her research in financial management in public health as well as collaborated with a range of stakeholders nationally and globally.”

Eyles also said that Choonara’s work was unique in that, “most research and policies are geared towards understanding and improving service delivery components, her doctoral studies focus on financial management which is a critical component of any health system”.
The 27-year-old says that as a young South African woman she has only one aspiration, and that is to bring healthcare to the poorest and most vulnerable.
Choonara’s aspirations outside of the healthcare field are just as ambitious and noble.
“I am interested in being the type of leader that the country desperately needs, but also one that espouses morality, respect, servant leadership and values to take the country to further heights,” she said.