Building the students and workers alliance

The Young Communist League of South Africa celebrated workers at Wits on Tuesday 2 May and made a call for the workers to confront the oppressive system they face daily at Wits. 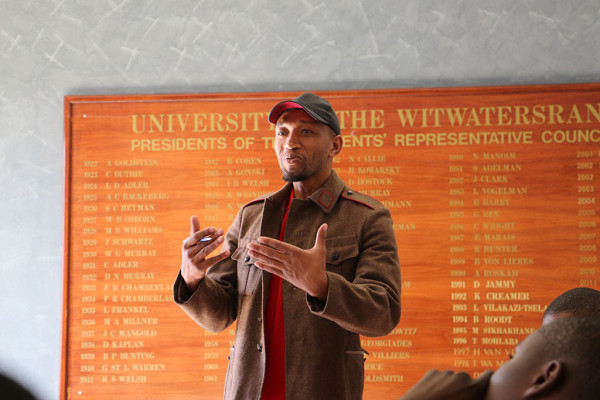 Alex Mdakane, Gauteng provincial secretary for the YCL, talks about strengthening their relationship with Wits workers.

The Young Communist League of South Africa (YCLSA) Wits University branch hosted a May Day programme on Tuesday to celebrate the workers at the institution.

The programme was run under the theme of Building the students and workers alliance. The programme addressed issues around strengthening the movement of the workers at Wits. It also addressed the student and worker alliance that emerged during the Fees Must Fall protests when students also were advocates for workers.

Keynote speaker Gauteng provincial secretary for the YCLSA, Alex Mdakane, gave an extensive talk on the issues that are faced by workers at institutions of higher learning. Mdakane said student struggles and workers struggles are not separate. “At the core of every struggle is the need for the working class to confront the system,” he said.

Mdakane also spoke about the importance of giving workers at the university professional titles that will ensure that they are compensated accordingly for their skills and services.

The benefits received by senior workers at Wits were also among the issues that were addressed, Mdakane said that management who take up senior positions at Wits enjoyed benefits that the workers could not. “The parent has access onto the grounds of the institution by virtue of them being an employee, but their child cannot access education at Wits because those are benefits reserved for senior management.”

Mdakane made a proposal “to convene workers’ councils that will assist workers to understand simple and basic things like payslips and bank statements”.

Commending students leaders, Madakane said, “The struggle that you have been waging at Wits University on behalf of the workers has influenced the responses from students in other institutions.”