WITS THIRD year students have started an online thrifted denim store called What the Denim. The store was launched on Monday, August 14. Owners of the store Onelela Jijana (21) and Lukhanyo Somlota (21) spoke to Wits Vuvuzela.

“The store was established from a shared thought among us, as well as our friend Simthandile Sityebi (21) who studies at Tshwane University of Technology. We then decided to launch it this year and as three young women, August felt like an appropriate month to embark on this endeavour fully.”

What the Denim uses Instagram, Facebook and its website to reach their target market. Jijana described the store as an artistic space that uses its handpicked thrifted denim pieces as a canvas. “It is also an art movement for young creatives to come together to share their ideas and collaborate to create,” she said. “We also try make What the Denim a mood-board that our customers can visit daily to get inspiration on how to wear denim and how to style it,” Sityebi added “Our target market is both males and females, mostly students who are tired of high-priced clothes and cannot find the specific items they want in the various retail stores,” said Somlota. 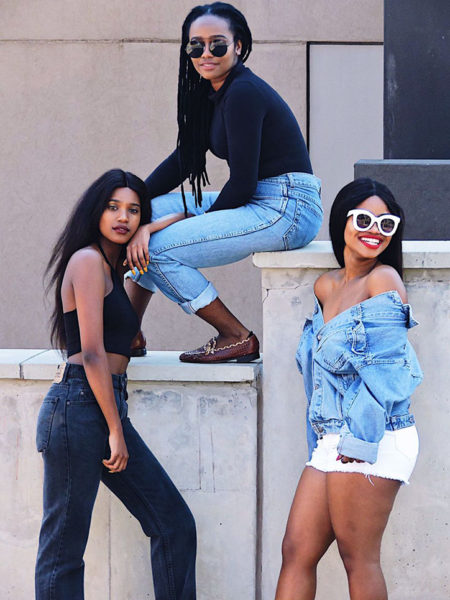 The store owners said their items also make a political statement. “We understand politics of fashion as being a notion that speaks to the communication of one’s identity, beliefs and values through clothes.

It’s the whole idea of having the freedom and autonomy to wear what you want to wear whenever,” Somlota added.  “There are a lot of social constructs that need to be broken for people, especially women, to be able to fully experience and express their “politics’’ through fashion,”  they said.

One of the customers of What the Denim, Angela Rangata (19), said she was approached on campus. “I decided to support them because they are young women who are bringing affordable denims to people,” said Rangata.

Khanya Nobangule (20), who models for the store, said she agrees because of the company’s concept. “I like the image they were going for, they cater for all sizes, styles and the prices are student friendly. They told me about their future plans for the brand, I am also a fan of classic denim clothing and the store catered for me.” Nobangule also said the idea of three black women “getting their own and doing it for themselves” excited her.