Journalists speak out against intimidation

Journalists in a panel discusion themed Journalism in the Crosshairs: Threats, Intimidation and Lies. 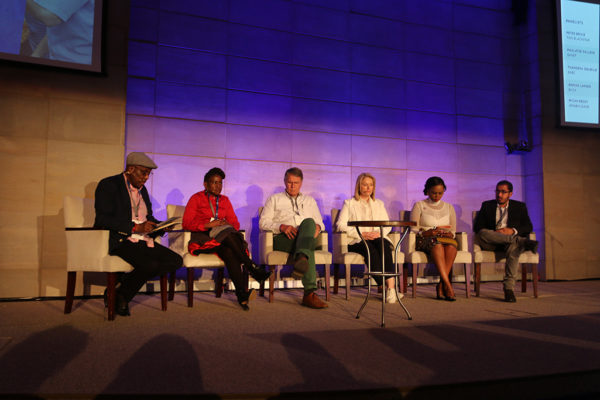 SIX local journalists detailed the risks of their work during a panel discussion at a media conference in Johannesburg on Saturday, 12 August. They spoke about current limitations to media freedom and their experiences of intimidation.

Gqubule was of the opinion that there was “a systematic, well-thought-through campaign to curb media freedom and influence the way we report”.

Moyane said continued attacks and intimidation on journalists were carried out by certain State organs. He added that there was a need to “defend the institution of journalism for a vibrant democracy that holds the executive to account and uncovers corruption and lies”.

“The problem with intimidation is that it works,” said Bruce. “It leaves a mark on you,” he said.

Gallens said newsrooms need to provide trauma counselling and urged journalists to support each other. “Beyond being heard, we need to have the media houses investing seriously in trauma counselling,” she said.
“We need to get into a project, that it is not just journalists protecting media freedom but that South Africans are actually doing the defending for us,” said Gallens.

Larsen said that editors had a larger role to play at protecting journalists by taking “a zero tolerance approach to bullying”.

The panel agreed that the strife and intimidation that journalists go through remains a concern that needs to be fixed.

“We play a very important role in this democracy and part of what we are going through is a reflection of the crisis in our country,” Gqubule said.
“We need to claim our role through the rise of dense resistance. We must bring the best journalism. Journalism can sell out; we journalists of South Africa must never do that,” she said.