Central Block has been officially renamed as Robert Sobukwe Block in honour of Robert Mangaliso Sobukwe, one of South Africa’s greatest anti-apartheid activists.

The Chancellor of the University, former Deputy Chief Justice, Dikgang Moseneke, and Wits Vice-Principal, Professor Tawana Kupe, presided over the ceremony and unveiled a plaque on Monday, September 18 at the Great Hall Piazza.

During his keynote address, Moseneke acknowledged that Wits has been “hopelessly late in honouring” Sobukwe.

Kupe said there had been a long history of efforts to name a building after the founder of the Pan Africanist Congress (PAC). “Before even the #FeesMustFall movement started there were already discussions driven by among many students, Vuyani Pambo (former chairperson of the Wits EFF), to name what we have now named Solomon Mahlangu building into Robert Sobukwe. We, however, took into account historical accounts and settled into renaming Central Block instead.”

According to Moseneke, “It is fitting that the Central Block be renamed to Robert Sobukwe Block. Sobukwe lectured at this institution and had his office in this very Block,” he said. “Despite Wits’ deeply colonial and racist setting at the time, he still wrote the newsletter known as the Africanist right here, under the noses of his employers,” he added. 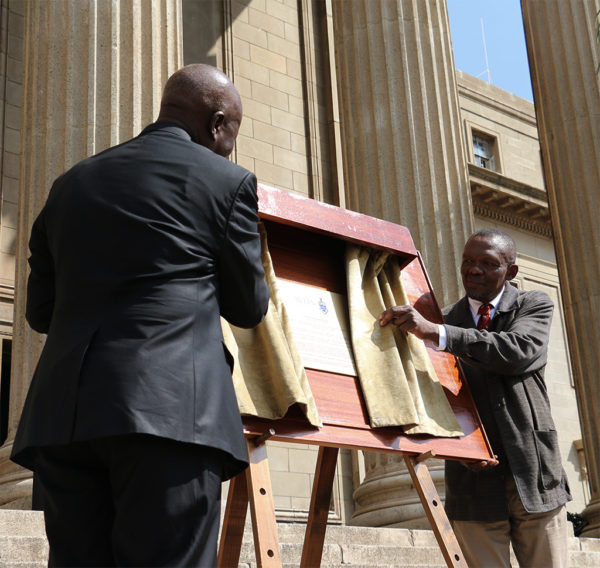 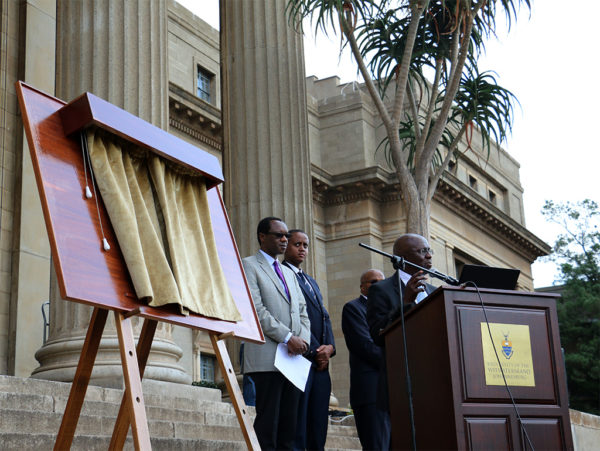 The culmination of “a long history of efforts” to name a Wits building after the founder of the Pan Africanist Congress. 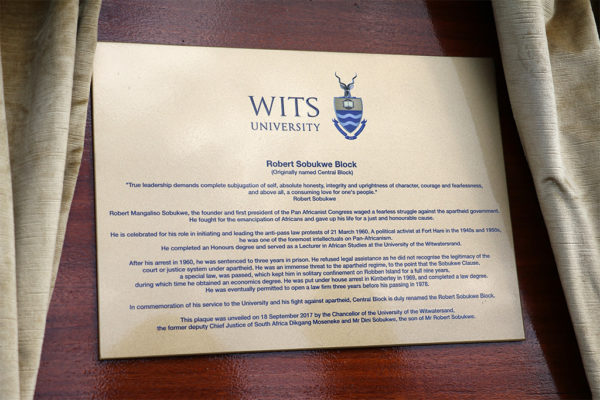 Sobukwe was a lecturer at Wits and drafted the founding documents of the PAC in his office in the Central Block.

Also in attendance was Sobukwe’s son, Dini Sobukwe, and members of the university community, predominantly made up of Wits Pan Africanist Student Movement of Azania (PASMA) members.

Dini expressed how much joy his father got from lecturing at Wits. “Letters from his former students thanking him [Sobukwe] for his work that we continue to receive express how much he was loved and he loved his students.”

According to Moseneke, Sobukwe drafted the founding documents of the PAC during 1959 in “this very Central Block before the launch of the Pan Africanist Congress in April 1959 in Soweto”.

Moseneke concluded by saying “This was a life well lived and worth celebrating. From his life we hope to learn how to live our own lives. We call to memory his visionary and selfless action in order to gird our own loins for the difficult task of truly liberating ourselves, a task which we have not achieved yet.”

Engraved in the unveiled plaque, is one of Sobukwe’s well known quotes: “True leadership demands complete subjugation of self, absolute honesty, integrity and uprightness of character, courage and fearlessness, and above all, a consuming love for one’s people.”