Girls are encouraged to speak openly about their periods in public spaces in order to break the stigma surrounding menstruation. 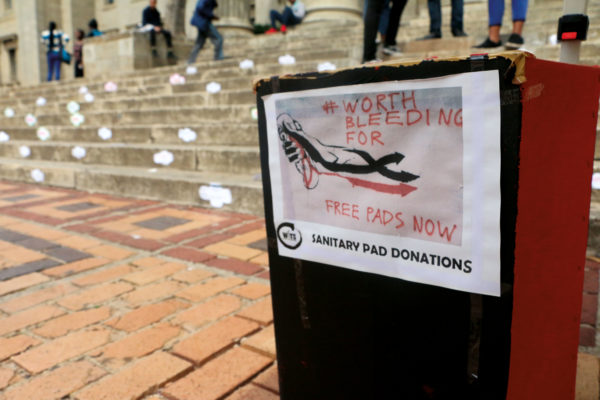 Girls going through puberty have enough problems without being made to feel dirty for having periods.

That was the abiding message at a discussion hosted by Amnesty Wits #WorthBleedingFor at the Great Hall Piazza on Wednesday, April 4.

The #WorthBleedingFor campaign hosted the discussion about menstrual health in order to challenge the stigma surrounding periods. One of the points raised was that women are shamed about periods and that the topic is forbidden in some households.

#WorthBleedingFor deputy chairperson Haafizah Bhamjee told the gathering that, “Men in the house can’t know about your periods and you’re considered to be dirty.”
She told Wits Vuvuzela that, “[Girls] are told they need to hide it. During puberty, girls already have a low self-esteem and being told that you’re dirty further breaks down girls’ self-confidence.
“One way to break the stigma is to speak about it in open spaces, in front of men.”

The campaign also invited the Mina foundation which introduced Mina, a menstrual rubber cup that is inserted into the vagina where menstrual fluid is collected.
Masego Sello from the foundation, said, “Menstrual cups have been around since the 1930s, the same time tampons were commercialised, but sanitary pad companies have kept this a secret. The cup lasts for five years and collects three times more fluids than tampons and pads.”