Gender-based harm on the increase around Wits

Two incidents of gender based harm in Wits community cause unease 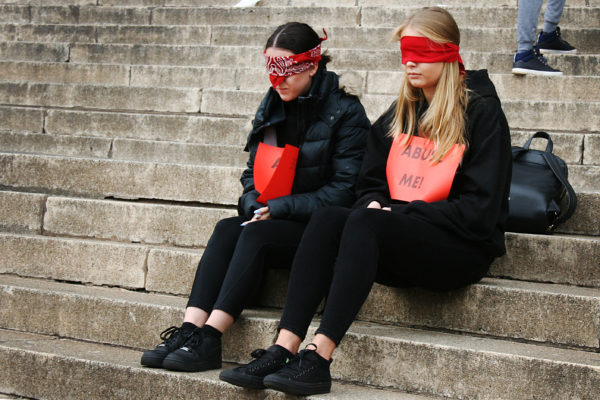 PERFORMANCE PIECE: “Abuse Me!” by BA Fine Arts students, Electra Panagiotides and Camryn Doubell, was performed on the Great Hall steps to highlight the continous gender-based violence that many women face on a daily basis. Photo: Elizabeth-Jane Ringrose.

Two recent cases of alleged rape and assault involving Wits University students has led to a wave of anger and unease among the Wits community.

On Wednesday, April 18, third-year education student Moses Modisane appeared in the Johannesburg Magistrates’ Court for a bail hearing following his arrest on April 10, on a charge of rape.

A student has accused Modisane of raping her at the Wits Junction residence (she is not a resident) just before the Easter break. She reported the alleged rape to the Gender Equity Office (GEO).

Director of the GEO Crystal Dicks said that Modisane had subsequently been suspended from the residence in Parktown and, in this particular case, Protection Services had been asked to serve Modisane with a suspension notice from the university.

In a statement released on Wednesday, April 18, the Junction house committee said it had sent a request to Director of Campus Housing and Residence Life Robert Sharman to remove Modisane from the house committee, after “allegations of sexual harassment and sexual abuse” were made against him.

Junction’s gender equity and transformation officer, Thandolwethu Siziba, told Wits Vuvuzela that, “These matters should be brought to the light and the general public and student body should be made aware because we’re not safe and we don’t feel safe and knowledge is power.”

Wits University has also released a statement this week on the alleged rape. “The university is actively supporting the victim. She’s receiving counselling support and the GEO’s processes are in motion. The university condemns all forms of gender-based harm, including rape, and acts decisively against any person found guilty of perpetuating such harm.”

Modisane’s bail application has been postponed to Wednesday, April 25. He remains in custody.

In a separate incident, a student was strangled by a fellow student at South Point student accommodation Epozini in Braamfontein at the weekend.

The regional marketing manager for South Point, Kheta Msane, confirmed that the perpetrator, a Wits student, had since been evicted from the residence after he admitted to the allegations made against him.
However, the GEO says it has not received a formal complaint.

Since the GEO was started at Wits in 2014, approximately 418 incidents have been reported to their office, says Dicks.

“If you look at the statistics from 2014 through to now, there have been increasing incidents.

“The spectrum of issues range. The increasing incidents could be because there are more violations happening but I think … there’s a greater awareness that there’s an office to deal with it.”

There are a number of policies at Wits, says Dicks, but “I always say policies are one thing; implementation is another. I think the biggest issue is that students and staff don’t know about these policies.”