The Hillbrow South African Police Services (SAPS) says it is concerned about the spike in the number of rape cases reported to its station involving Wits students in recent months.

Sargeant Mduduzi Zondo, communications manager of the Hillbrow SAPS, said that while he could not provide specific figures, his station has noticed a definite upsurge in the number of cases reported to their office.

“Between March and this month of April, the number of rape cases reported is high and this has made us aware that something is very wrong and the number is growing.”

“I can’t be specific with stats and numbers but most of the cases are reported during the early hours of the morning, some at 2am, some at 4:30am,” Zondo says.

Zondo said there seems to be a pattern to these crimes. “Students go to entertainment places and sometimes someone ends up alone and meets someone who promises to take her home and she ends up somewhere else where the rape takes place and they become victims.”

Zondo says he concerned about the issue and urges students to be aware of their surroundings.

“We plead with students to help us prevent this from happening again. Don’t just accept lifts from people and make sure you are with someone at all times,” Zondo said.

Zondo’s cautionary words comes on the heels of the fourth court appearance of Wits student Moses Modisane who has been charged with the alleged rape of a fellow Wits student. Modisane remains in custody at the Sun City prison until his bail application hearing on May 2.

Last week, widely circulated tweets from a young woman in Braamfontein claimed that she was nearly kidnapped in Braamfontein. When contacted by Wits Vuvuzela, the alleged victim said she was not ready to comment on her tweets (pictured below). 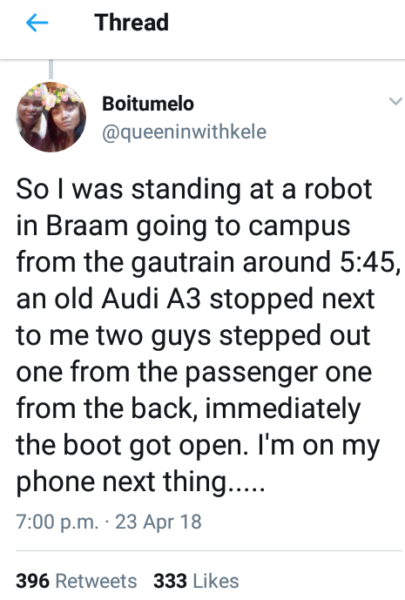 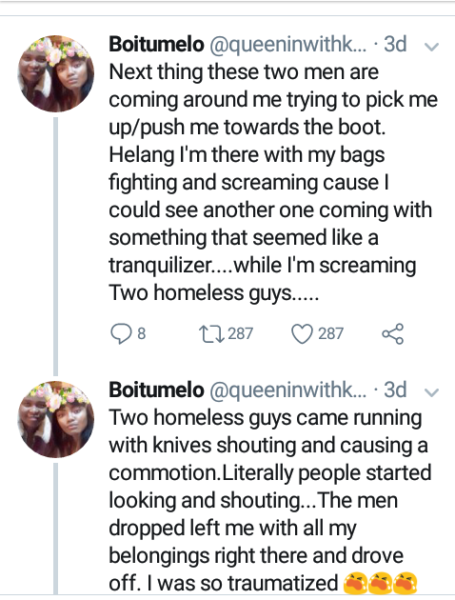 Director of the Wits Gender Equity Office (GEO) Crystal Dicks said she is worried that such cases are not being reported to her office pointing to an apparent gap between the students and the GEO.

“The cases are not being reported here and maybe that’s because students don’t think we can provide support to them or maybe there is just no awareness of the GEO,” she said.

Dicks told Wits Vuvuzela that the university is having on-going discussions about improving safety measures.

“We have had discussions about having a satellite SAPS office in Braamfontein, more cameras and lighting around the area, extending bus operating times and we are working on having an emergency response around rape on our website,” Dicks said.

I would like to be part of meetings between SAPS and CPS and work with them not just to make it safer, but to offer support to students,” she added.

Head of the Wits Campus Protection Service (CPS) Mokgawa Kobe told Wits Vuvuzela that they are aware of the issues and are working together with the Hillbrow officers. “We meet often but I don’t want to say that we have a rape problem.” “We are having a campaign around safety and security in May,” said Kobe