A race to end gender-based violence

Wits students participated in a fundraiser by non-profit company 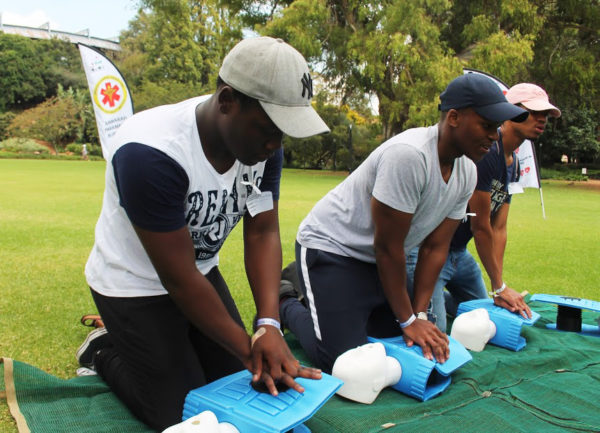 An accident nearly marred a fun-filled fundraiser on April 13 to finance vocational and life skills training for women who have suffered from gender-based violence (GBV) at Wits University.

A paramedic assisting at The Amazing Race, the event hosted by the Balloon Foundation, was involved in an accident on Yale Road when his bicycle crashed into a car near a bus stop.

“I wasn’t going at a high speed, so the impact wasn’t that bad but the bike flipped twice and landed on top of me – all 400kg of it,” Yusuf Mall, 25, told Wits Vuvuzela.

He was transported to Netcare Milpark Hospital where it was found that though he had bruising over his entire body, he had not suffered any broken bones.

The Balloon Foundation is a registered student run non-profit company, which aims to raise hope in communities around Johannesburg through interactive initiatives such as The Amazing Race.

Clues were situated around East and West campuses, where students had to partake in activities related to GBV, such as self-defence and cardiopulmonary resuscitation (CPR) on dummies.

Attiyah Ghanchi, chairperson of the Balloon Foundation and third-year Occupational Therapy student, said that the campaign is centred on highlighting the problem of GBV, as “South Africa has the highest rate of domestic violence worldwide with one in two women experiencing this abuse.”

The Nisaa Institute for Women’s Development, a non-governmental organisation that focuses on gender violence and women empowerment, told Wits Vuvuzela that they wanted to raise awareness about GBV.

A social worker from Nisaa, Yvonne Chiwutsi, said that the main objective was to “break the silence and cycle of domestic violence”.

“This is a good space for us to not only have fun, but to have a discussion to say it’s happening and ask what we can do about it,” Chiwutsi said.