Loss for Wits after tough fight against Tuks

The Wits Ladies Football Club lost 3-1 against Tuks Ladies at the LC de Villiers Sports Grounds, in the Sasol Women’s League, on Sunday, May 5. 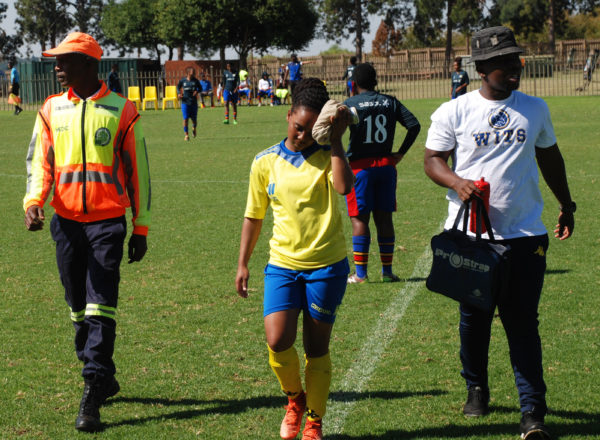 Tuks made the first breakthrough when number 10, Thalea Smidt, scored the opening goal of the game after Wits keeper, Simamkele Lesele, blocked an attempted goal which deflected back into the field and giving Smidt a perfect chance for a goal.

Though Wits had a good defence, they struggled to equalise the match within the first 45 minutes, which put a dry end to the first half of the game.

Right off the whistle a higher intensity from both sides was noted.

Thereafter tensions grew which led to a deliberate hand ball by Tuks’ Khodani Manyanya who received a yellow card, but Tuks redeemed themselves in the 79th minute when Katlego Khwinana scored their second goal of the match.

Tuks’ moment of magic came during extra time as they confidently sealed the game with their third and final goal by Jabulile Mazibuko, which left the distraught Wits keeper injured in the 91st minute. 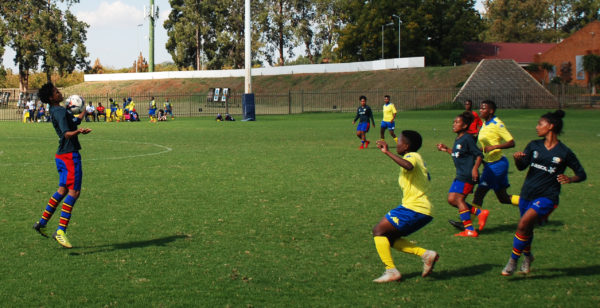 Wits Ladies struggled to command the field as Tuks Ladies took the win on Sunday, May 5.
Photo: Gemma Gatticchi

“I think we struggled to break Wits but then eventually we managed… Our heads went down a bit when Wits equalised but I commend [Tuks] for coming back,” Thalea Smidt, the Tuks player who opened the scoring, told Wits Vuvuzela.

Wits Ladies captain, Kebogile Nteu commented on how she felt about the loss. “We played according to our plan in the first half. We tried to contain them as much as possible … Our plan was to score first but we couldn’t.”

Nteu said she is glad the team managed to equalise against Tuks, but in the end they could not keep up with the opposing team.

“We played as a team and that’s a highlight for us,” she added.

FEATURED IMAGE: Tensions were high as Tuks ladies took the win against Wits Ladies, during the tenth match for the second week in the Sasol Women’s League.