A retired Wits professor receives a lifetime achievement award for his contribution to sociology.

Professor Edward Webster, a sociologist, was honoured with the isidanga award by SASA in Pretoria on Tuesday, July 16.

“It is called isidanga and the citation refers to me as ‘umdala’, a living ancestor. I think this is such an imaginative way of developing an African response to scholars you wish to acknowledge,” said Webster, 77. 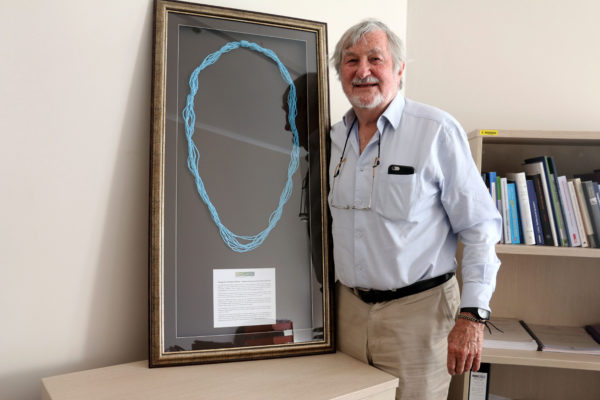 “I was surprised and very touched by this gesture from my colleagues. I was especially delighted by the way in which SASA has ‘decolonised’ such an award by giving me a beautiful blue beaded necklace, which is given amongst the amaXhosa elders as a symbol of respect for the work they have done,” Webster told Wits Vuvuzela.

The former president of SASA, Dr Babalwa Magoqwana, said, “The necklace is to honour Eddie Webster, as an elder among many who have contributed to the foundations of South African Sociological Association and the discipline of sociology.”

Magonqwana also said the members of SASA appreciate how Webster’s work will benefit many generations of South African sociologists. Webster is a distinguished research professor based at the Southern Centre for Inequality Studies at Wits. He is also the founder of the 30-year old Society, Work and Politics Institute (SWOP), where he remains an associate.

“I have supervised over 120 masters and PhD candidates and it is very rewarding to see them now as professors, cabinet ministers, vice chancellors and CEOs of research institutions and successfully running leading South African enterprises,” Webster said.

A colleague and former student of Webster’s, Mondli Hlatshwayo, told Wits Vuvuzela that he read about Webster’s nomination on Twitter and was excited that he would be receiving this well-deserved award.

“I thought it was a good nomination, which he deserves because for his contribution. For example, he has produced many black PhD candidates which is important especially in the context of South Africa where blacks are being undermined from different perspectives,” Hlatshwayo said.