Undergraduate stands out among 13 finalists in a creative art exhibition for Witsies.

A third-year fine arts student won the Wits Young Artist Award 2019 for his performative display on Thursday, July 25, at The Point of Order art gallery in Braamfontein.

Adrian Fortuin won a cash prize of R10 000 for The readymade, made ready, his exhibit of a real-life security person guarding a trophy on a podium. 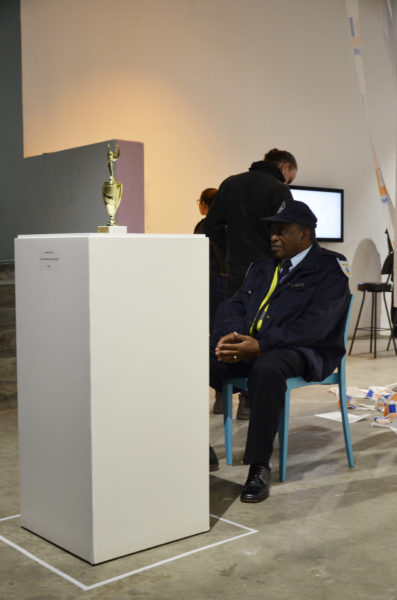 The Wits Young Artist Award (formerly known as the Martienssen Prize) is compulsory for visual art students who are in third or fourth year. It was introduced in the 1980s and is focused on “rethinking and re-imagining what an art award means in a pan-African university”, according to Reshma Chhiba, one of three co-ordinators of the exhibition.

Fortuin told Wits Vuvuzela that, “I’ve been thinking about this idea of competition in a gallery space and creating work that will comment on the kind of situation or social structure that becomes part of the gallery when a competition is involved.”

The 24-year-old said he wanted to create something that was interactive to audiences and critique the idea that an art object needs to be something on a wall.

“It was very interesting because you normally think of security guards to almost be part of the structure of an institution.

“They kind of fall into the background and I think that did happen [at the exhibition]. There was very little interaction with the security guard,” the Johannesburg-born artist said.

A friend of the winner and fine art student, Riley Grant, said Fortuin has the “ability to articulate complex ideas in a seemingly simple, accessible and often humorous way”.

This year’s two panels were made up of professionals in the arts and creative industry. Over 50 entries were received and the selection panel, consisting of artist Nandipha Mntambo and filmmaker Dylan Valley, chose the 13 finalists.  The winner was then chosen by the judging panel which was made up of genderqueer artist, Dean Hutton, lecturer Dr. Dee Marco and artist Mary Sibande.

Chhiba said the adjudication panels were independent of Wits staff in order to avoid a biased approach as well as to allow the students exposure into the industry. 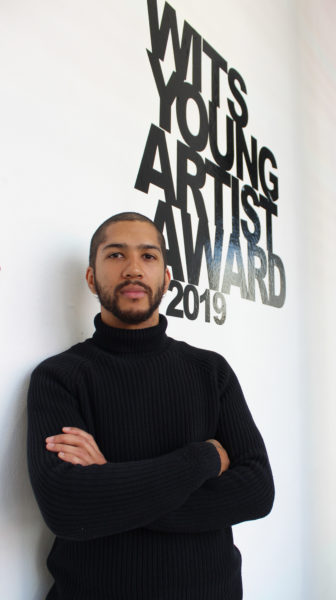 Adrian Fortuin is a third-year student who has won the Wits Young Artist Award of 2019. Photo: Ortal Hadad

The first runner-up was Hemali Khoosal who created a digital video installation commenting on the refugee crisis in Europe. She contrasted visuals of the sea with a father discussing his child’s mixed identity.

Mzoxolo Mayongo and Adilson De Oliveira of the MAGOLIDE collective were the second runner-up with their virtual reality interaction that focused on African histories and landscapes.

Jessica Jindrich, a finalist, said the competition allowed students to find a junction between the academic world and reality.

“I think exhibitions such as Wits Young Artist Award are important as initial platforms for the work we are producing. [They] start the conversations we want to be having, without the interaction being too insular,” said the fourth-year fine arts and psychology student.

The exhibition can be viewed by appointment at The Point of Order art gallery until August 8.

FEATURED IMAGE: Adrian Fortuin is a third-year student who has won the Wits Young Artist Award of 2019. Photo: Ortal Hadad