Titans fail to prove themselves against Quantum’s strong offense.

The Wits Titans conceded a tough defeat against the Quantum Volleyball Club in their second round match in the Johannesburg Volleyball Union League at Wits University on Monday, August 5.

Quantum took all three sets, although the Wits Titans played a generally strong game. At first, the Titans struggled to find their feet as they made various attacking errors and were unable to defend effectively.

A spike by Quantum player, Munyam Juredith Anam led her team to a 25-11 triumph in the first set.

The game started to heat up during the second set with Titans taking the lead with 5-11 owing to service errors by Quantum.  Although Quantum regained their lead, things came a head when Titans captain, Angelou Nyathi and and fellow player Aphiwe Mtshali successfully blocked the ball, resuting in a deadlock. After a tough battle, the second set ended 29-27 after Quantum capitalised on errors by Wits. 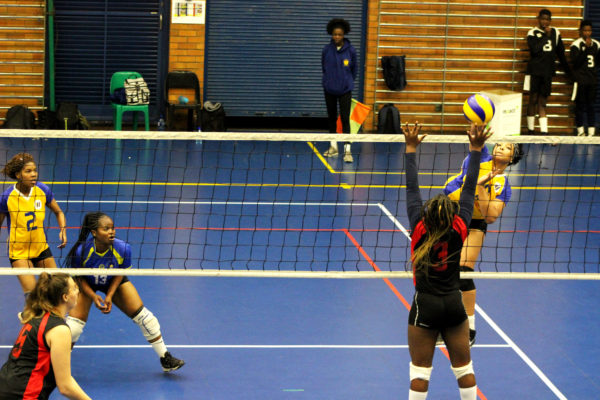 Both teams remained committed as the scores were evenly matched in the final set. Quantum’s victory of 25-22 in the third set came when Titans vice captain Zinhle Kunene hit the ball off court.

Christian Nenkov, acting Quantum coach, said it was good to see his team come back after the second set.

Titans coach, Zweli Ngwenya, said that he felt his team could have won the second set. “I do think it has to do with mental strength,” Ngwenya told Wits Vuvuzela. “I think there are a few young players that are not experienced in that.”

Wits is due to take on Spiker-Roo for their third and final match of the second round on Monday, 12 August.