The Wits women’s basketball team hosted the Lady Bucks tournament from August 8 – 11, 2019, at Wits Hall 29 with the aim of empowering women in sport.

In the first division final, Wits Lady Bucks lost 63 – 62 in a highly-anticipated game against VUT, this year’s champions of the tournament.

In the second division, Lady Bucks lost to Zimbabwe ATS under-20 side before the semi-finals. Epiglo played against Joburg District in the final and won 83 – 37.

The tournament is an annual event that aims to facilitate development of young players and encourage sisterhood among teams across the country. 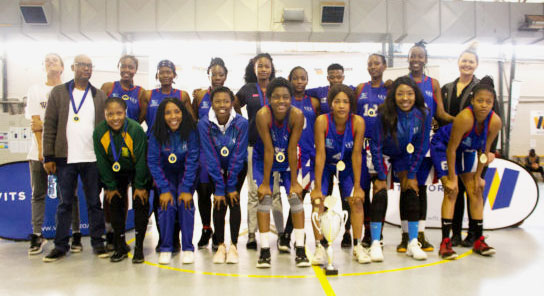 Athi Matshaya, a shooting guard for the St Peter’s Predators, said that the tournament is one of the few spaces where young women in basketball are respected.

“Generally at school, girl basketball players are not respected as much as the boys so it’s really nice to get this experience and be treated as if we are part of the sport as well,” said Matshaya, who played against the Wits Buck Ladies on the first day of the tournament.

“This tournament is important given the climate with South African women’s basketball, where we’re not given enough exposure because we don’t even have a national league,” said Rudo Kaseke, Wits Basketball chairperson and senior player for the first division.

“The tournament symbolises that there is sport for women after primary school, after high school, after varsity even. We have clubs in South Africa and this is where they get to showcase what they have,” said Kaseke, a fourth-year LLB student at Wits.

Lady Bucks captain Tlangelani Baloyi said she hopes the impact of the tournament will be to change the dominant perspective of basketball as a rough sport played exclusively by men.

“As much as we try to uplift women in sports, we always get sidelined,” said Baloyi, a masters student in construction and project management.

“We get people to bring their family and friends and experience it because most people think basketball is harsh, it would be great for people to have a different perspective of basketball and not just view it as a man’s sport,” said Baloyi.

Kaseke said that her highlight of the tournament was seeing the sportsmanship among young women trying to change representation of the game.

“The atmosphere, other teams cheering for other teams, women coming together for a bigger purpose and the fact that we can support on and off the court means we’re heading in the right direction,” said Kaseke.

The tournament included a community outreach component through a collection which will go to children at the Strathyre Salvation Army Girl’s Home in Kensington, Johannesburg.

“We’re having a charity drive [until the end of August] where we are asking for sanitary pads and clothes, so that young girls can also participate in sports,” said Kaseke.

Kaseke added that, “Most of the time what ends up happening is when girls hit puberty they usually stop playing sports for various reasons and one of the biggest problems is because they don’t have sanitary pads.” Contributions to the collection can be dropped off at the Wits Sports Council offices at Sturrock Park, west campus.