The Activate Wits society has been nominated in the best LGBTQIA+ Student Movement category for the Feather Awards, which takes place on October 17.

The nomination at a ceremony at Constitution Hill, on Thursday, August 29, coincided with the annual Wits Pride Week, which was organised by Activate Wits, in collaboration with the GALA Youth Forum, the Wits Transformation Office and other stakeholders.

Chairperson of Activate Wits, Zanele Hlogwane, said it was an honour to be recognised for the hard work they had put in. “I feel really excited for [our] efforts and to be recognised. It’s a great opportunity,” Hlongwane said. Other nominees in the category are the University of Johannesburg LGBTI Society and the Vaal University of Technology LGBTIAQ Society. 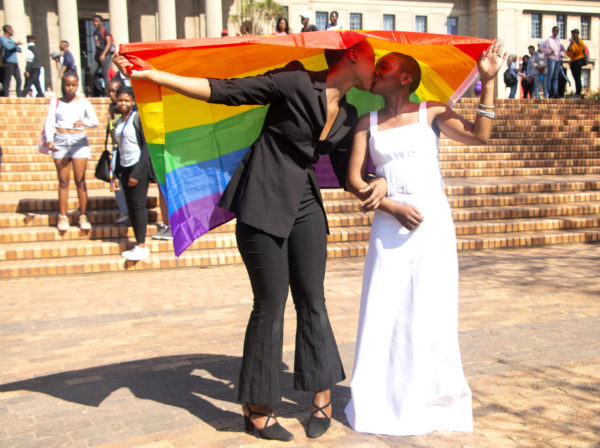 Under the theme ‘Busting Binaries’, this year’s Pride Week aimed to highlight the existence of identities that do not fit into the male-female or gay-lesbian categories.

The week opened with a Queer Art Exhibition at the Wits School of Arts.

“We felt like we needed to make a change, be out there and be who we are,” said Ncemane.

“I didn’t expect to see so many people. I’m also happy because Wits is acknowledging the existence of queer people, even though there’s always room for improvement,” Mufamadi told Wits Vuvuzela.

Tish Lumos, safe zones coordinator at the Wits Transformation Office, said “Binaries are a default. For example, male and female bathrooms assume that there are only two genders and such things need to change.” 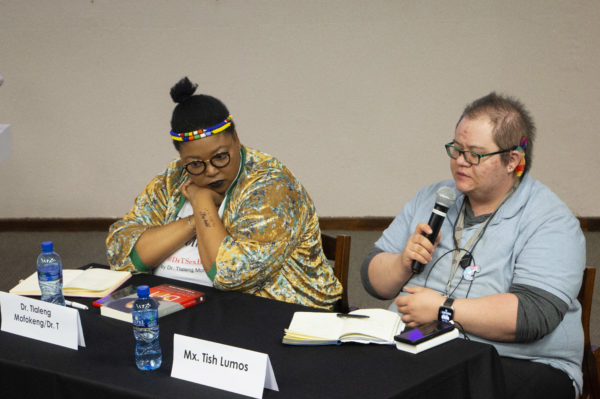 Other speakers at the discussion included Dr Tlaleng Mofokeng, a medical practitioner speaking on the importance of doctors being trained to be able to cater for LGBTQIA+ individuals.

“The problem with the education sector is that it lacks the ability to incorporate LGBTQIA+ matters in their curriculum,” said Roché Kester, manager of the OUT Love Not Hate Programme.

On Tuesday, there was a photo booth by the pride wall, and a quiz night at Umthombo Building on East Campus.

Shannon Wardlaw, equity and legal officer for Activate Wits and one of the photographers at the booth, said “There was a good response from students during orientation week for a photo booth, hence its incorporation into pride.”

On Wednesday, Mfundo Bamuza, a second-year BA politics and media studies student, facilitated a queer forum, where the topic of discussion was the visibility of queer individuals on campus. “We must set our own agenda and decide which issues we need to deal with, said Bamuza.

A movie scheduled for screening later that afternoon at Umthombo was cancelled due to technical glitches.

Thirteen people took part in a scavenger hunt at the GALA Youth Forum offices on the seventh floor of the WAM building on Thursday.

Tiisetso Koto, a second-year BA general student, said the timing of this year’s pride week may not have been the best. “We would’ve liked more support in terms of attendance, but we also understand that it is test week and most students are focused on preparing for their tests,” Koto said.

Dozens of students marched from East to West campus on Friday, to celebrate the queer community at Wits and beyond.

Pride Week 2019 ended with a whimper on Saturday, August 31, with only one family turning up for the queer family day picnic at the Library Lawns.