First-year and foundation music students hit the stage for the first time at The Dean’s Concert.

The top first year musicians from the Wits School of Arts performed various musical generes at The Dean’s Concert at the Atrium on Tuesday, September 17.

The Dean’s Concert highlights some of the first year and foundation phase music student.

Music lecturer, Peter Cartwright told Wits Vuvuzela that the concert provides an opportunity to Wits students to perform in public for the first time.

It is also a way of raising funds for students who compete for monetary prizes sponsored by the Dean of Humanities, Acting Dean of Humanities Prof Garth Stevens, which will be announced once the winners are chosen.

“Students are selected after a rigorous audition process to ensure a high standard with prizes being awarded to the top students to contribute towards their study fees.

“It is also a chance for the parents and lecturers to meet one another,” said Cartwright.

Sibonelo Kodisang, one of the participants who’s tenor saxophone performance raised the audience from their seats, said he loved performing on stage with a full band and The Dean’s Concert is among the very few platforms that allows him to do what he enjoys.

“I particularly enjoyed my own performance and the experience was surreal. I wish to perform more of these because it’s the closest thing to feeling like a professional musician than anything,” Kodisang told Wits Vuvuzela.

Fourth-year music student who was in attendance, Chesney Palmer, said the concert was a delicate experience especially for first year students who can take notes of their own progress as performers.

“I really enjoyed it and I think you can kind of get an idea of the different characters and stylistic approaches to music which is really great,” said the 23-year old. 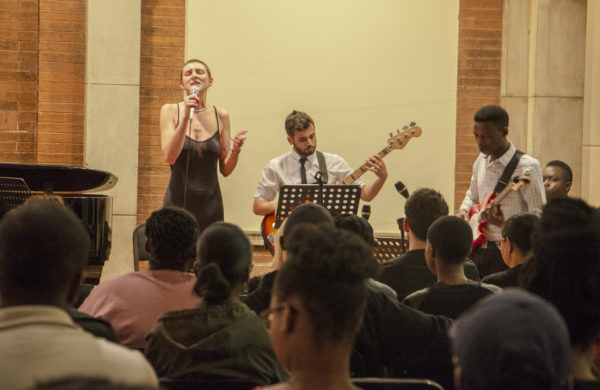 Foundation phase musician, Giuliette Price ended the evening with a groovy and soulful tune called Put your records on by Corinne Bailey Rae, expressed that her song selection initially came from wanting to do something that resonated with what the country is currently facing, in light of gender-based violence and xenophobia attacks.

“I wanted my performance to be a release and instead give the audience an experience that might just take their minds off all that.

“I thought the lyrics are an example of how we seem to worry about things that we don’t have much control over and sometimes the best way of dealing with things is to relax, put your records on and let your hair down!” Price told Wits Vuvuzela.