Hubbly bubbly may not seem as innocuous as it claims to be.

Pipe it down, Witises, as hubbly bubbly is said to be more dangerous than smoking cigarettes. Hubbly bubbly which is also known as hookahs, are a popular activity among Wits University students and has become a familiar sight at social gatherings as students huddle around a ‘hub’, each taking turns inhaling the fruity flavours.

“You are sucking chemical pollution directly into the lungs”, says Professor Guy Richards, a pulmonologist and head of critical care at the Faculty of Health Sciences at Wits University.

When smoking hubbly bubbly, flavoured tobacco is placed inside a bowl at the top of the device. This bowl is then covered with a porous piece of tinfoil and hot coals are placed on top. As an individual inhales through the hose, heat is sucked from the coals, through the tinfoil and past the tobacco. Smoke from the tobacco then moves through a pipe down to the bottom of the device, where it passes through water that acts as a filter before the smoke is in inhaled.

Richards says that hubbly bubbly is generally believed to be harmless because the water in the device is thought to filter out noxious chemicals. But water cannot filter out the chemicals rendering the hubbly just as, if not more, harmful than regular cigarettes.

Hubbly users are easily spotted across Wits campus, with the Matrix, Zesty’s and Library Lawns the most popular hangouts for users.

Gary Kruser, director of Wits Protection Services (WPS) said that as hubbly is tobacco-based it is permitted on campus however there aren’t designated areas or policies that address the smoking of hubbly on campus.

Kruser said WPS along with Occupational Health and Safety (OHS) are working to develop smoking policies and designate smoking areas as people have complained about the smoking of hubbly on campus. OHS is a multidisciplinary practice dealing with aspects of health and safety in the workplace.

“There are probably about 4000 chemicals inhaled each time that you take a puff through these things [hubbly bubbly] which cause a profound inflammatory infection in the lungs,” says Richards, adding that this can either lead to “carcinogenesis or the development of emphysema”. Carcinogenesis is the formation of cancer and emphysema is a condition when the linings of the tiny air sacs in the lungs become damaged beyond repair, making it difficult to breath. 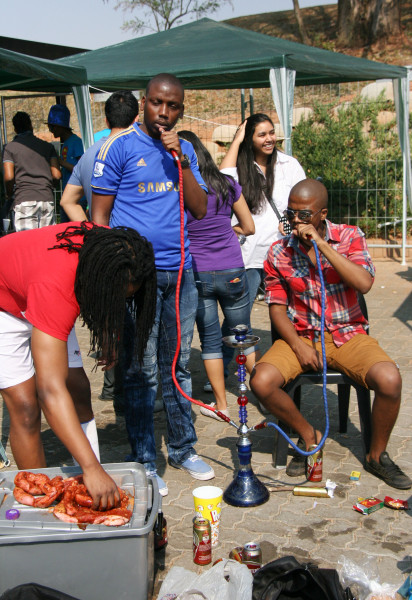 Nicotine is highly addictive and is found in tobacco products, says Savera Kalideen, executive director of the National Council Against Smoking.

“Life is about risks. People drink alcohol and it is bad for you, I would rather be smoking hubbly than cigarettes,” said Aadil Mohamed, a third-year BSc student.

The 21-year old said that hubbly “it’s not like cigarettes which [you] crave all the time, I smoke it [hubbly] if it’s there”.

Richards said the danger of smoking hubbly is that it is a gateway drug to smoking cigarettes, as the user becomes addicted to the nicotine and may use cigarettes as an alternative, if one is unable to smoke hubbly.

The American Heart Association says that nicotine “causes an increase in blood pressure, heart rate, flow of blood to the heart and a narrowing of the arteries (vessels that carry blood)” adding that “nicotine may also contribute to the hardening of the arterial walls, which in turn, may lead to a heart attack”.

Kalideen says that “studies have shown a hookah smoker takes about 100 puffs in a single (45 minutes) session, while a cigarette smoker takes about 10 puffs per cigarette”. Which means that smoking one hookah pipe is a much as smoking 10 cigarettes. In a single smoking session, the smoke produced can “contain about 36 times more tar and about 8 times more carbon monoxide than the smoke from a single cigarette,” says Kalideen.

Mohamed said that he smokes four pipes every day and a session can last up to four hours.

Hubbly allows users to smoke tobacco in different flavours such as cherry, strawberry, lemon mint and apple. The flavourings of hubbly contain tobacco, glycerine, honey or molasses. Kalideen said that the flavourings sweeten the flavour and “disguise the tobacco as well as add to the volume of smoke by vaporising into a thick fog.”

The molasses and honey mask the smell of tobacco and sweetens the smoke whilst the glycerine contributes to the thick clouds of smoke.  According to CANSA, “By altering the taste, smell and other sensory attributes of products, tobacco manufacturers entice new users, mostly youth, to start and continue smoking”. 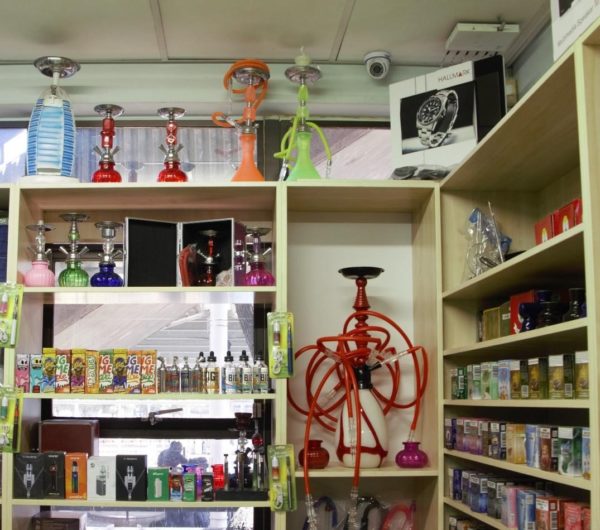 A shop in the Matrix at Wits University which sells hubbly bubbly, flavourings and coals to students. Photo: Lwazi Maseko

Julian Jacobs, a second-year computer science student said that “We are also breathing toxins from pollution, so I might as well enjoy the flavour”.

“So many things are harmful for you but we continue to do it,” said the 21-year old, who has been smoking for three years.

Elize Joubert, CEO of CANSA urged young people to be aware of tactics used by tobacco companies and to “understand that these alterations to products, while enhancing the experience, do nothing to reduce the long-term negative effects of smoking or the risk for several cancers”. Kalideen said that the “inhalation of the tobacco, liquid and smoke through the mouth increases the risk of developing oral cancer inside or around the mouth”.

Infections such as tuberculosis (TB) and hepatitis may be passed on through the sharing of the pipe says Kalideen. A hubbly user who has TB or hepatitis passes on the infection by smoking and inhaling the tobacco through the pipe and the infection is passed onto another user, as “the bubble is someone else’s spit,” says Richards. Evidently hubbly users are swooping each other’s spit, which results in, infections being passed around.

Hubbly is “particularly harmful and addictive to people under the age of 25, as their brains are still developing,” said Joubert. Hubbly contains chemicals which are harmful and a hubbly user is exposed to the chemicals for a longer period, which results in hubbly being more harmful than cigarettes.

Mohamed said that he does take precautions when smoking, by cleaning the pipe to remove dirt and not allowing anyone outside of his social circle to share the same pipe.

Both students were adamant they would not stop smoking.  “I love this thing. At this point, I am young and I am going to keep smoking,” said Mohamed.

Jacobs said that “I am going to die anyway so I might as well enjoy it, on my way”.

FEATURED IMAGE:  Students enjoy hubbly bubbly as part of their social activities but ignore the potential dangers of it. Photo: Wits Vuvuzela.