Security guards found nothing on the man and set him free. 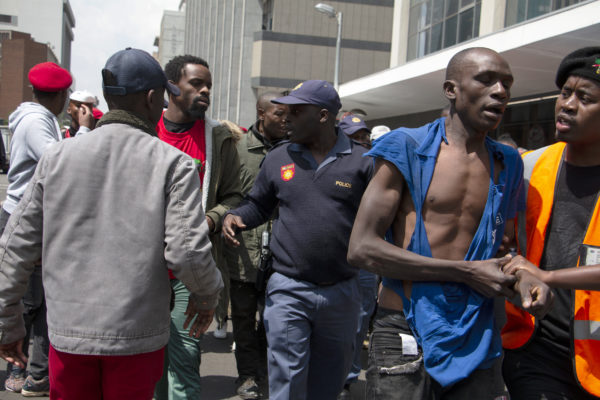 A man was attacked by a mob that mistook him for a thief in the Johannesburg CBD on Tuesday, October 1.

He was saved by the arrival of four Stability Unit police officers who managed to stop the mob from hurting him any further. According to the South African Police Services website, the Stability Unit is made up of “proactive and reactive teams, K9 Unit, Forensics, Detectives and Crime Intelligence Unit members”.

The victim, Justice Chauke, told Wits Vuvuzela that, “When I got out of the store (Sportscene on Pritchard Street) another man got out. I heard a lady saying ‘Vimba, vimba! (Stop him!)’, I turned and [the guard] was running (chasing the thief). I saw [the man] in front of me running, I also started running. I was scared because I also came out of the store… they hit me and took my money (R250),” said Justice Chauke.

The police took him back to Sportscene where the “real thief”, who had allegedly stolen a pair of jeans, had already been apprehended. As all the commotion was taking place, the “real thief” was standing quietly in the store’s backroom.

The store’s security guard, Moses Phako, said Chauke could be freed since they had confirmed that they had the real thief. “He is free to go. He did not take anything and we found nothing on him. We will deal with the thief,” he said.

The Stability Unit police left the alleged thief under Phako’s supervision while waiting for the police responsible for processing his arrest.