The protest that started on Monday, March 8 turned deadly as police opened fire on students.

An unidentified man has died during the Wits University fees protest in Braamfontein on Wednesday, March 10. The man was shot in the chest, allegedly by members of the SAPS, after leaving the My Clinic Medical Centre. He succumbed to his wounds a short while later on De Beer street despite efforts at resuscitation by his doctor. 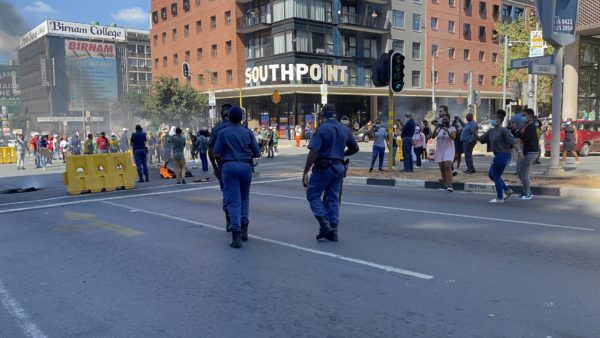 The incident occurred as police released stun grenades and opened fire on protesting Wits students who had blockaded Jorissen street by burning tyres and overturning rubbish bins. The crowd dispersed quickly but soon regrouped after hearing about the fatality.

“More than anything this a mourning scene we have lost a life here, let’s respect the person who died here,” said SRC President Mpendulo Mfeka speaking close to where the body of the deceased lay.

Mfeka requested the presence of the minister of higher education and training, Dr Blade Nzimande, Wits University vice-chancellor, Professor Zeblon Vilakazi and police spokesperson , Mavela Masondo, on the scene, but none of these people arrived.

On Tuesday, March 9, Masondo told television broadcaster eNCA, that protestors were forcing their way onto the Wits medical school campus and SAPS had to protect the property as well as the people on the premises. “We asked them to disperse, some of them cooperated and some of them didn’t. Unfortunately, we had to use rubber bullets to disperse those that didn’t want to cooperate. One of the protesters were (sic) arrested, we have opened a case of public violence for further investigation,” said Masondo. There was no such request from SAPS to the protesters to disperse ahead of the shootings earlier today.

The Wits University Senior Executive Team (SET) said in a statement later in the afternoon that,  “Wits is deeply saddened to learn of the passing of a 35 year-old man in the Braamfontein CBD outside the institution this morning. The university extends its condolences to the family of the deceased.”

The statement added, “We condemn any form of violence and call on all persons to keep calm during this very difficult time.”

The Wits protest, which is in support of students facing financial exclusion, started earlier this week in support of over 6 000 students who are not able to register as they have historical debt with the institution. The protestors want all qualifying students to be allowed to register regardless of their debts.

“We are here today comrades let us remember that this is a generational mission, we are not here because of temporal comfort, we are not here just for registration, we are here for free, quality and decolonized education. So, we will make sure that every platform and every opportunity that is given to us we will capitalise on it,” said Mosa Khoza, secretary general of the Wits EFFSC. 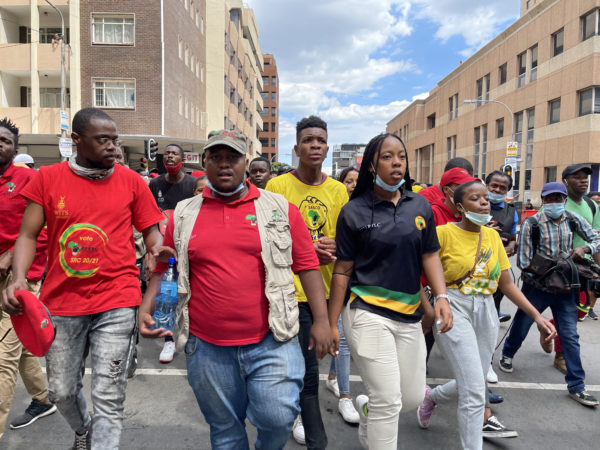 Protesters walking up De Beer Street in Braamfontein, where a man was shot dead earlier on today. Photo: Khuleko Siwele

The death of the young man in Braamfontein seemingly united the various politically-divided protesters as they formed a guard of honour and sang in unison as his body was removed by the forensic pathology services. Officers from the Independent Police Investigative Directorate (IPID), are currently leading an investigation into the shooting.

FEATURED IMAGE: Protesters sending off the body of the deceased man who died in Braamfontein. Photo: Khuleko Siwele