The German car manufacturer collaborated with the Wits school of arts to celebrate 50 years of global cultural engagement.

BMW South Africa has been releasing weekly behind-the-scenes footage of an art project collaboration with the Wits school of arts (WSOA) graduates, since March 31.

The latest, posted on April 14 on BMW’s YouTube channel, features The Hue Drawing by Micaela Rose Wentzel. The BA fine arts graduate created the artwork from exterior water-based paint and cement-based plaster. The mural’s reflection bounces off a large window of the IT building at the car manufacturer’s Midrand campus.

“For me it is an exploration of how colours interact, grow and feed off of one another through different environments, eyes and forms. You can use this as a metaphor for many different aspects of life, ideas around change, growth and influence,” Wentzel told Wits Vuvuzela.

“I taught at Wits from June to October 2019 in tutorials how to support project candidates,” said Scherf. In March 2020, a jury selected the top six pitches by five artists, and commissioned site-specific artworks.

Hedwig Barry, an MA graduate, realised two artworks at BMW Midrand. Crumple, a sculpture made from automotive paint on aluminium, depicts Barry’s artistic focus on “the interface of the personal and the public, the emotional and the intellectual and the bodies, grounds, materials, desires and gestures which give meaning to these relationships”. She says it “acts as a kind of signal to passing motorists on the N1″.

Occupying two storeys at the Welcome Centre, Love Letter for Lost Travellers, Barry’s second artwork, is made from polyurethane foam and automotive paint and depicts love and loss. 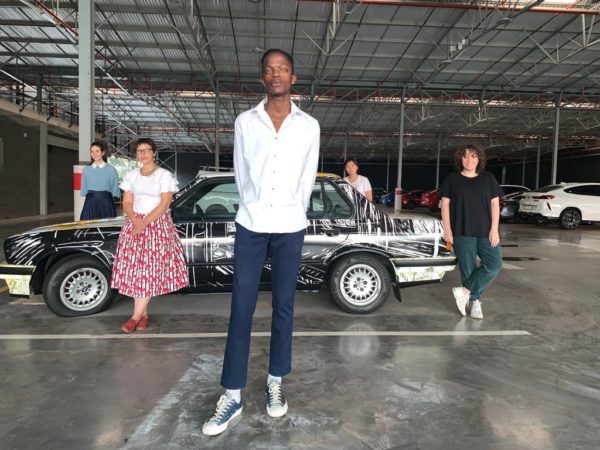 BMW Group is known for collaborations with art students from various academic institutions globally. This is the first time the initiative was brought to South Africa, and WSOA, in celebration of 50 years of global cultural engagement.

BA graduate, Themba Sebastian Mwanza, created a mixed-media car, Mangobe Gado Gusheshe, about which he says, “I used [the] linocut of a train interior and risograph prints of train tickets which were translated into vinyl to wrap the car.” To upholster the interior of the car, silkscreen prints on denim were used, inspired by the blue-collar working class.

The artworks of WSOA now have a global presence, alongside those by other pre-eminent artists who have partnered with multinational brands such as Esther Mahlangu and Nelson Makamo.

纸 (ZHI) is a framed work, made up of recycled paper from the BMW offices, inspired by BA graduate Tzung-Hui Lauren Lee’s interest in paper as a medium since her second year. “Paper holds aspects of the self through DNA, data and energies,” she said.

The use of a single Chinese character for the title is metaphorical. “The characters themselves have the same meaning but the pictorial image of it is under constant change. This constant change refers to the process I use within my practice… I am under [a] constant state of adjusting,” said Lee.

Shayna Rosendorff’s Constructed Spaces is a series of three photographs of miniature sculptures she manipulated to become a full representation of the landscape. “The constructed landscapes are built with the purpose of understanding how one’s perception of imagery can be manipulated through the way in which the image is represented,” she said.

Apart from providing the liaison point for the project manager and the BMW Midrand team, Wits professor Andrew supported the artists. “Each project presented to the jury in Munich was worthy of realisation in its own right and all the students who participated in the project will go on to do great things as artists. They have all extended their practices in considerable ways and realised work that is able to take its place in the professional artworld,” Andrew told Wits Vuvuzela.

Rosendorff’s series of three photographs of miniature sculptures is next to feature on BMW South Africa’s YouTube channel.